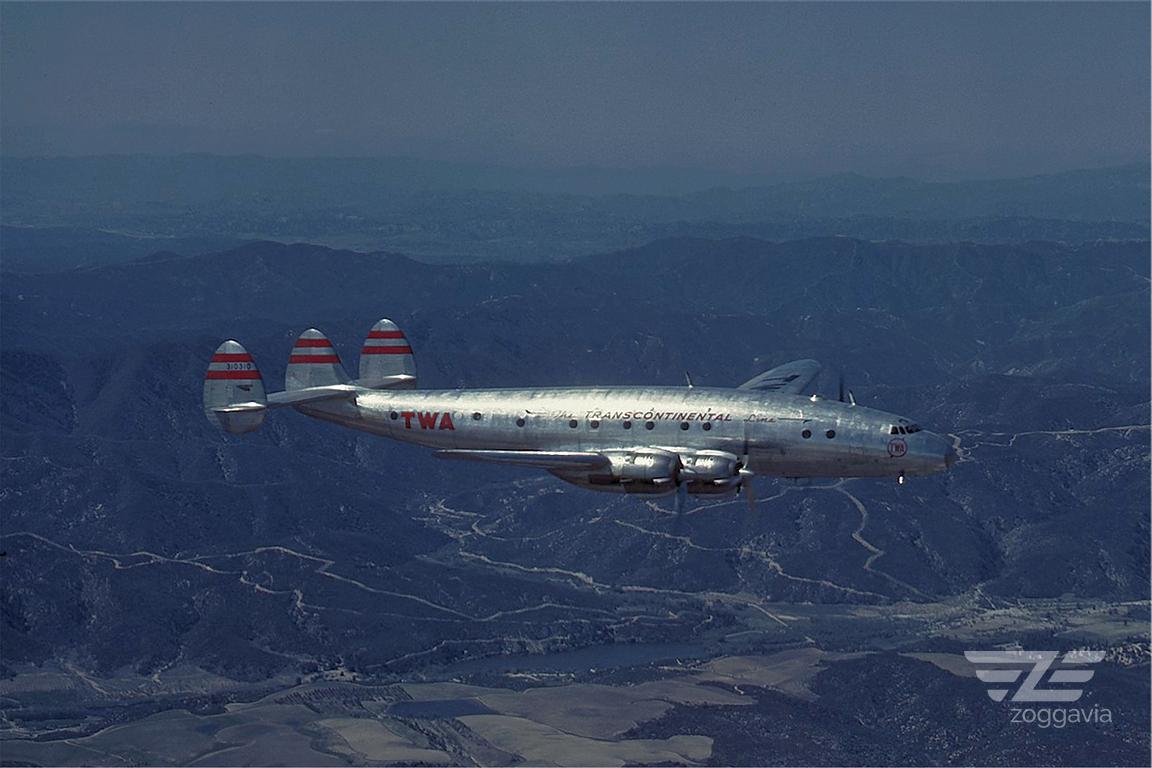 The Lockheed Constellation series of aircraft was a successful design that initially began as a militarized transport, appearing in limited numbers towards the end of World War 2, that gained more fame in the civilian transport airliner role soon after. The system represented the military concept of long-range transport and refined design, incorporating various elements into the fold that would produce one of Lockheed's most memorable models. The initial models flew as early as 1943 through the war's end. The Constellation's performance was up to expectations; the plane reached a speed of 347mph... the same as the best fighters of the period. An order for 150 C-69C given by the USAF at the beginning of 1945 was canceled, with the war's end in the Pacific in September of the same year. At their height, the orders had reached 260 Connies, a figure which was reduced first to 73 before, in the end, the supply contracts were all canceled. In total, 22 examples of C-69 were made for the USAF in two batches, the last seven aircraft being directly sold to civilian operators. 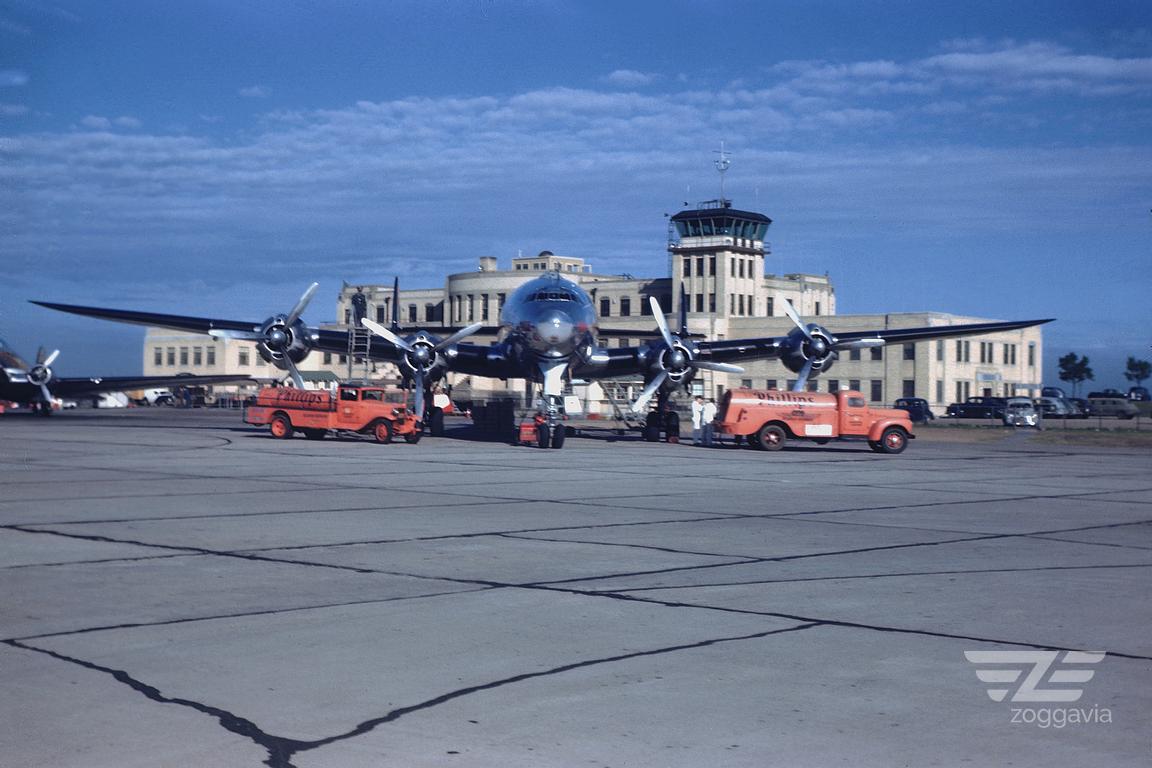 By the mid-1930s, aviation technology had advanced to the state where commercial air transport was in a position to boom, with the Civil Aviation Act of 1938 establishing the Civil Aeronautics Administration to regulate the growing industry. Douglas and Boeing flew prototypes of pressurized four-engine airliners -- the "DC-4E" and "Stratoliner" respectively - in that year, but the Lockheed Corporation was overburdened with building small twins. Lockheed engineers were tinkering with the design of a four-engine pressurized airliner, the 30-seat "L-044 Excalibur" -- very much along the lines of an enlarged Lockheed Model 10 Electra twin -- but there was no push at the time for full development.

On 9 June 1939, Lockheed headquarters was paid a visit by well-known millionaire Howard Hughes, who had secretly obtained a majority share in Trans World Airlines (TWA). Hughes arrived in the company of Jack Frye, who Hughes had made TWA's president. TWA was bleeding money; Hughes believed that TWA's fortunes would be significantly improved if the airline obtained a leading-edge four-engine pressurized airliner with a trans-Atlantic range and a cruise speed of 480 km (300 mph). 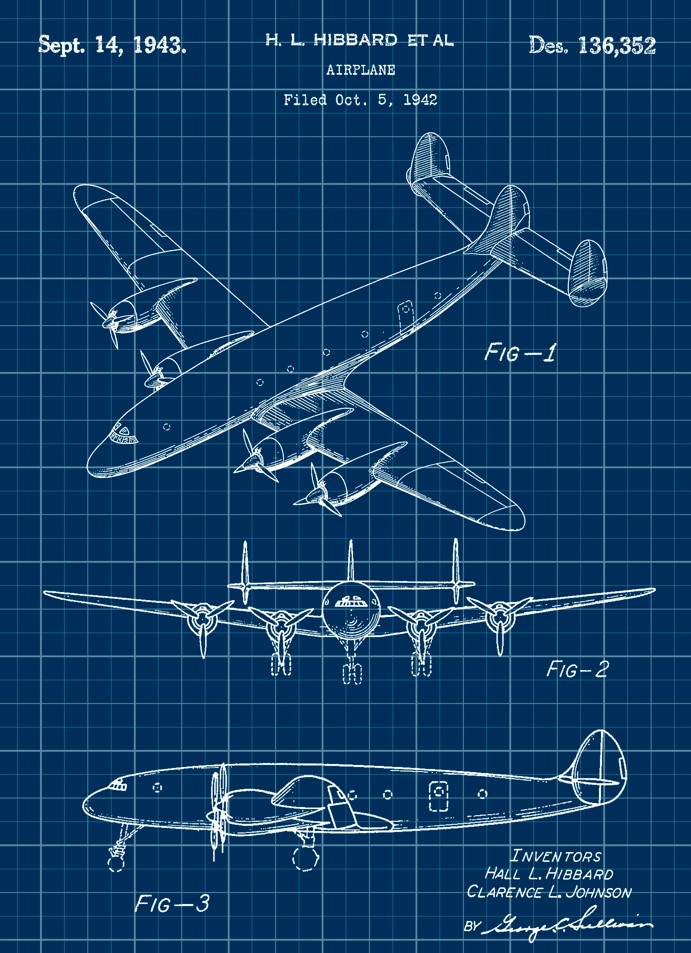 Here you will see the Constellation by serial numbers and operators

Lockheed's competitors had turned down the request, finding it too aggressive, but Lockheed president Bob Gross called in his chief engineers -- Clarence "Kelly" Johnson and Hall Hibbard -- and told them: "Come up with something." Excalibur couldn't do the job as was, but it was a starting point. Long meetings were discreetly conducted at a Hughes place in Hollywood, leading to Lockheed offering Hughes the "L-049 Constellation". Hughes asked the price, to be told: USD 425,000. Hughes mulled that over, then replied: "Hell, TWA can't pay. The airline broke. Go ahead and build 40. I'll pay for them myself."

With America's entry into World War II on 7 December 1941, commercial airliners production effectively stopped for the duration. Work on Model 049 continued since the US Army Air Force (USAAF) effectively hijacked the program for war needs in 1942. The initial flight of the prototype from Burbank, California - 4 landings and takeoff were made at Muroc Air Base in California before returning to Burbank - was on 9 January 1943, the aircraft being piloted by Lockheed test pilot Milo Burcham and Boeing test pilot Eddie Allen. 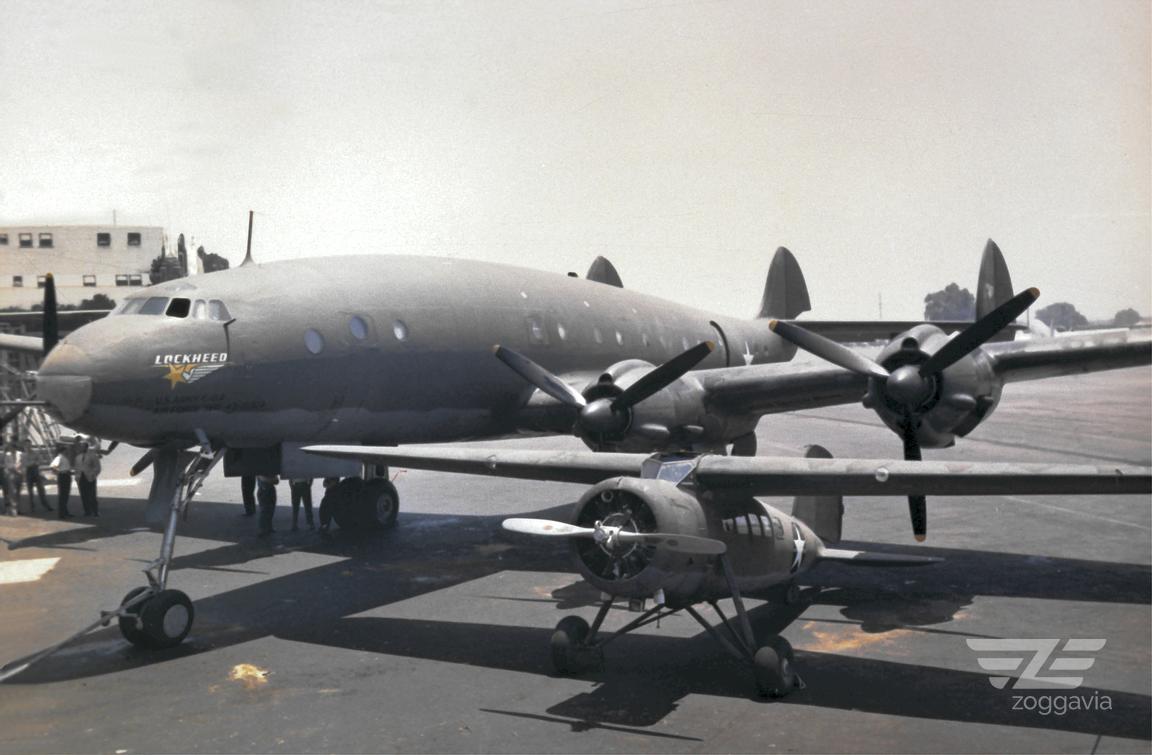 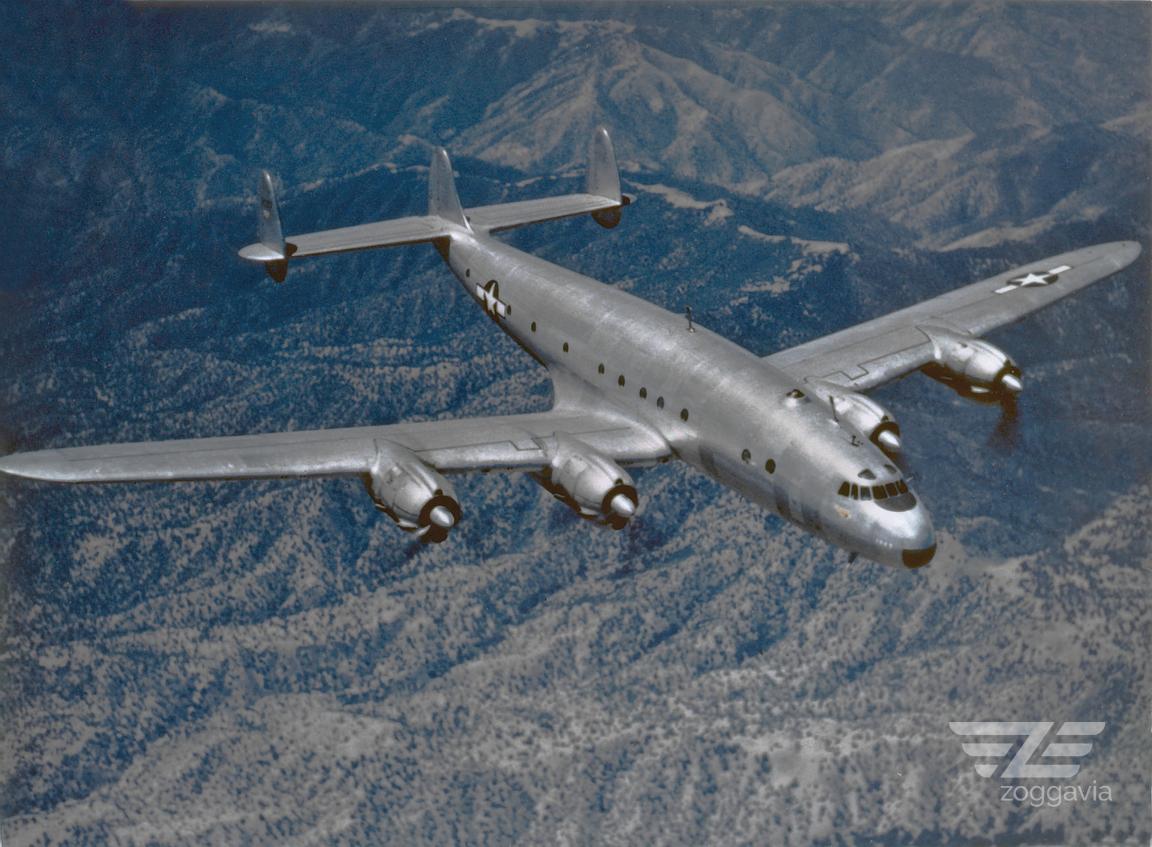 Allen was there at the insistence of the USAAF, no doubt due to his familiarity with four-engine aircraft. According to the tale, after Allen got back on the ground, he said: "This machine works so well, you don't need me anymore." -- and went back to Seattle. Then again, he may have just wanted to get home; he was killed a little over a month later in a ghastly crash of a Boeing B-29 Superfortress prototype. The "C-69", as the USAAF designated it, was painted in military olive-green colors, sporting Lockheed company logos. It would be the only C-69s to have such a color scheme. All other Connies were delivered in natural metal finish.

The Constellation was primarily made of aircraft aluminum alloy and featured:

A sleek fuselage, something like an elongated fish with smooth curves, featuring a circular cross-section, a snub nose, and a triple-fin tail. Triple tail fins were selected because a single tail fin would have been too tall to fit into typical hangars.

A low-mounted wing with four two-row 18-cylinder air-cooled Wright R-3350-35 Duplex Cyclone radial engines, providing 2,200 hp each. The wing was derived from that of the Lockheed P-38 Lightning twin-engine fighter. The wings had two spars, each wing stowing inboard and outboard fuel tanks; the four tanks provided a total fuel capacity of 17,775 l (4,690 US gallons)

A conventional flight control surface arrangement: flaps, ailerons, rudders, elevators, and tabs for trimming. All controls were hydraulically-actuated. Early production machines had fabric-covered Ailerons; the Ailerons were metal-skinned in later production. All flight surfaces could be optionally fitted with pneumatic de-icing boots.

There had been thought of a perfectly streamlined cockpit, giving the aircraft something of the appearance of a whale -- but as the Model L-049 flew, it had a conventional stepped cockpit. There had also been consideration of highly streamlined engine nacelles, with air inlets in the wings to provide reverse airflow, but that still needs to be done.

The C-69 was configured as a troop transport, with 44 seats on the right and four folding four-seat benches on the left, for 60 passenger seats. There were two lavatories in the rear. The C-69 was fitted with militarized avionics, including radios, navigation/landing aids, and an identification friend or foe (IFF) transponder. The "C-69A" was a military troop transport with 100 seats and window ports through which troops could fire their weapons, while the "C-69B" was a long-range version of the C-69A; neither was built.

In April 1944, to publicize the Constellation, Howard Hughes flew the second c/n 1962 C-69 from Burbank to Washington DC nonstop in six hours, 57 minutes, and 51 seconds, setting a transcontinental speed record.

Although it was on loan from the military, Hughes had large "TWA" logos painted on it. However, the C-69 was still suffering from teething problems at the time, and it would never reach full-service status during the war.

The USAAF had placed orders for 22 C-69s, including nine originally to be built for TWA and 13 from a projected military buy of 180. One was configured as a VIP transport, being designated "C-69C"; it would end up in service as a pilot trainer, then later sold off to the British Overseas Airways Corporation / BOAC. The USAAF took the delivery of only 15 C-69s, the military finding the Douglas DC-4 / C-54 generally satisfactory for the personnel transport/cargo lifter mission - though it was smaller, slower, and lacked pressurization. The end of the war resulted in the cancellation of further production of C-69s. The US Navy obtained two C-69s under the designation of "R7O-1".

Lockheed retained the prototype C-69 for development. The Connie was fitted with four Pratt & Whitney (P&W) R-2800 Double Wasp two-row 18-cylinder air-cooled radial engines with 2,100 hp each and a thermal de-icing system, to be redesignated "XC-69E". The interest in the Double Wasp was driven by the fact that the Duplex Cyclone had several problems early on, notably a tendency to catch on fire, but the issues were resolved. Although early on, Lockheed offered customers a choice of the Wright Duplex Cyclone, the P&W Double Wasp, and even the British Bristol Centaurus two-row 18-cylinder radial - clearly with UK sales in mind - nobody ever ordered the Constellation with Double Wasp or Centaurus engines.

Lockheed bought back the seven unfinished C-69s on the Army order, with the military selling off eleven 69s to civil service as well. Lockheed fitted them all out as civil airliners, with improved accommodations and climate control, plus a galley. The climate control could have worked better, with some passengers roasting while others froze. The navigator's compartment could be a crew rest area for overseas flights, additional seating for eight passengers, or a lounge. Emergency escape was in a primitive state in those days, with passengers and crew expected to get out using a rope ladder. Eventually, emergency chutes were installed instead. 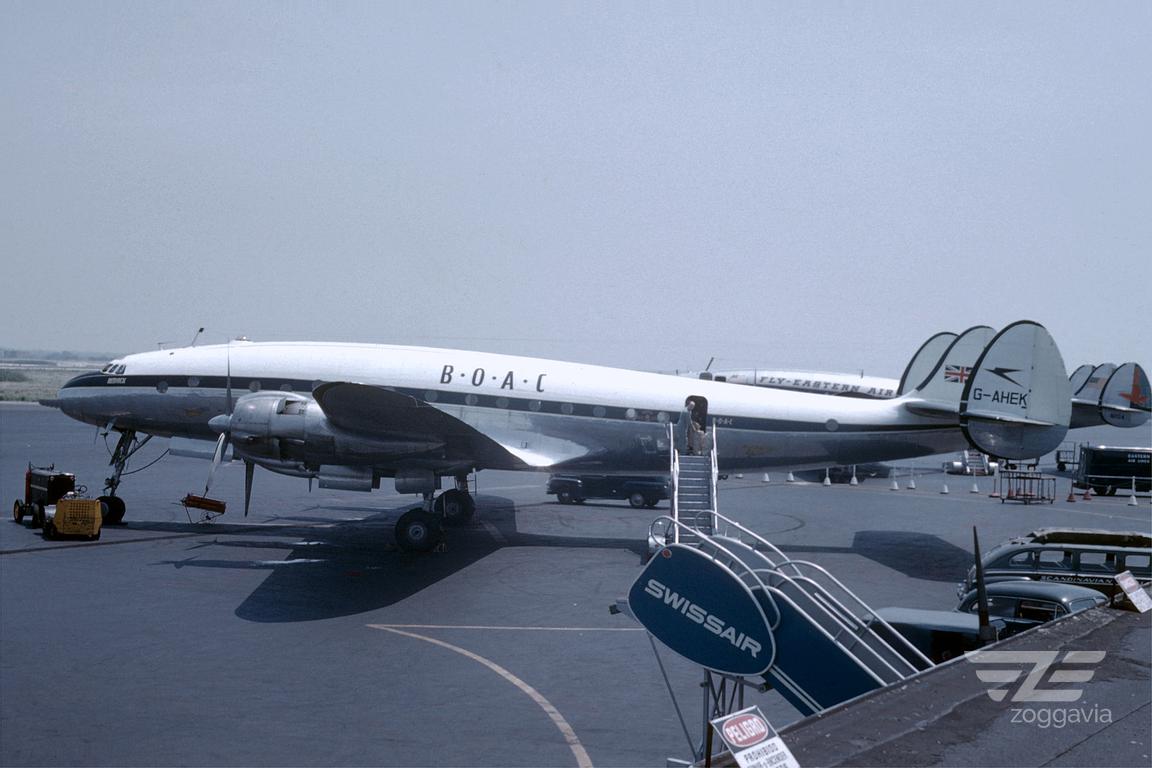 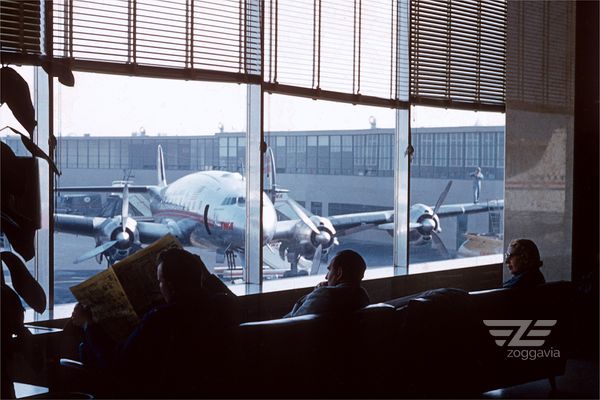 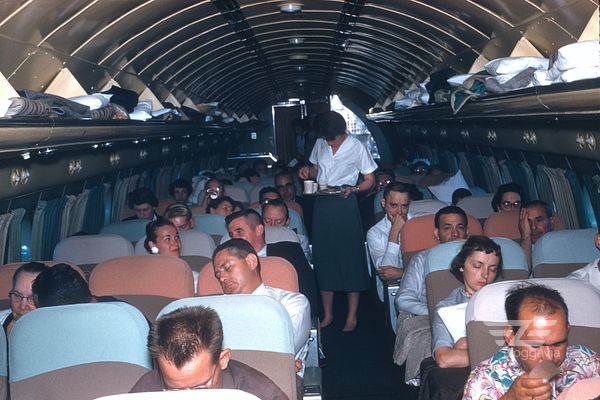 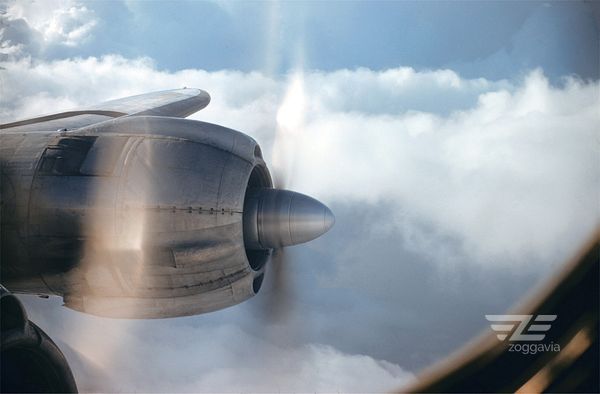 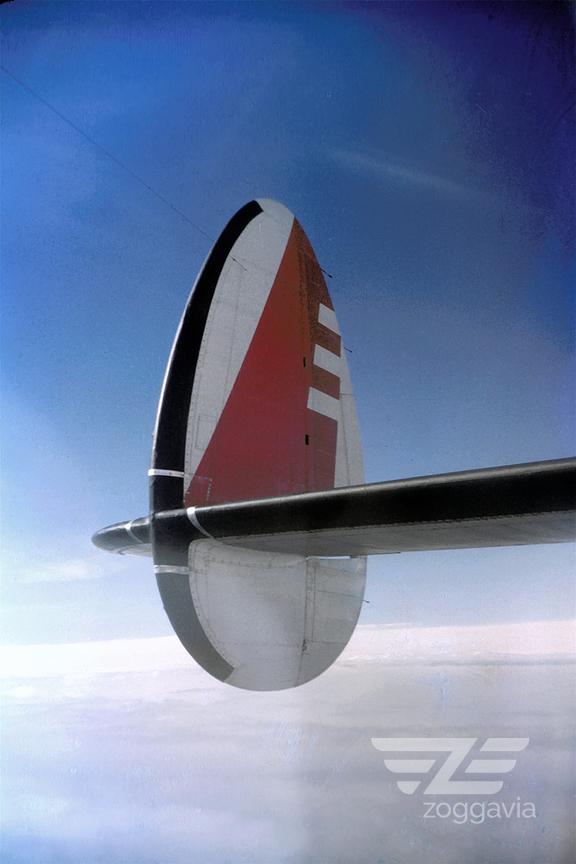