The following Kodachrome slides were made with a high quality camera during the years 1940 and 1950. 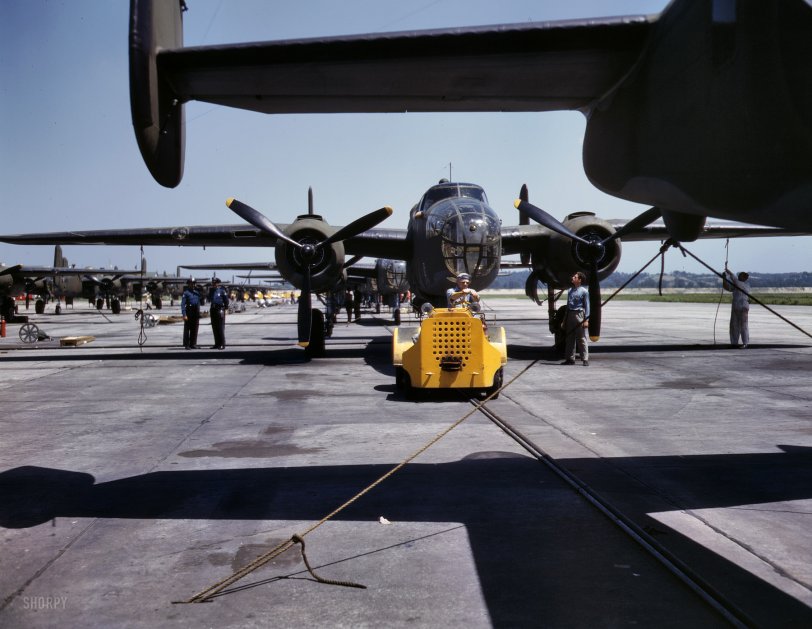 October 1942. A new B-25 bomber is brought for a test hop to the flight line at the Kansas City, Kansas, plant of North American Aviation. Alfred Palmer, Office of War Information. 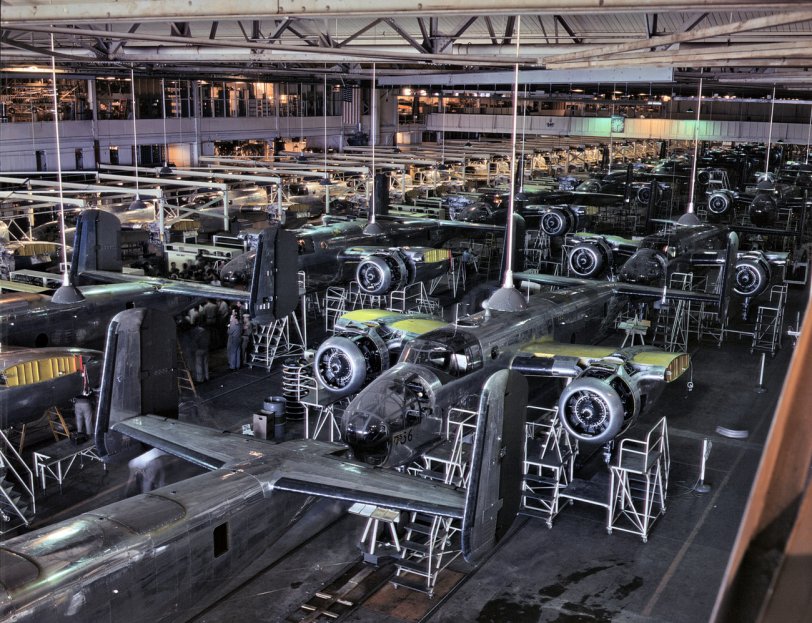 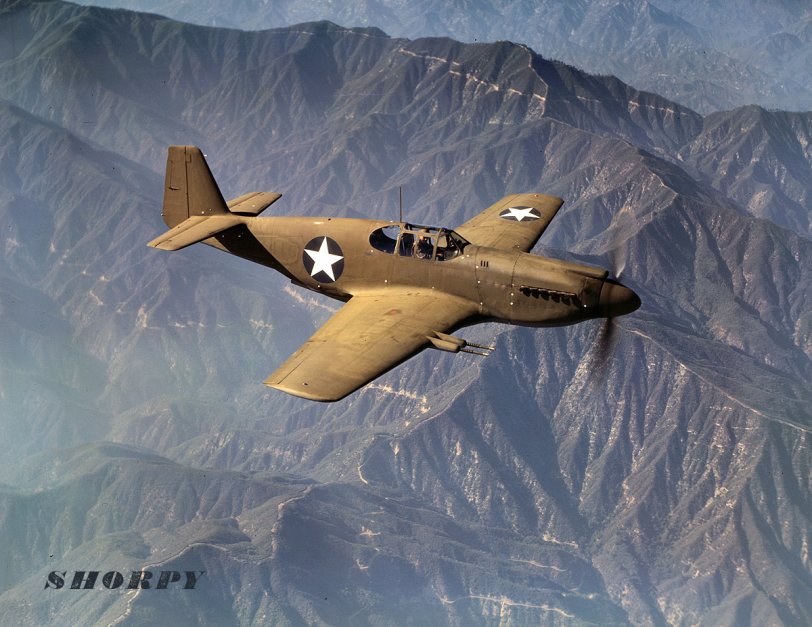 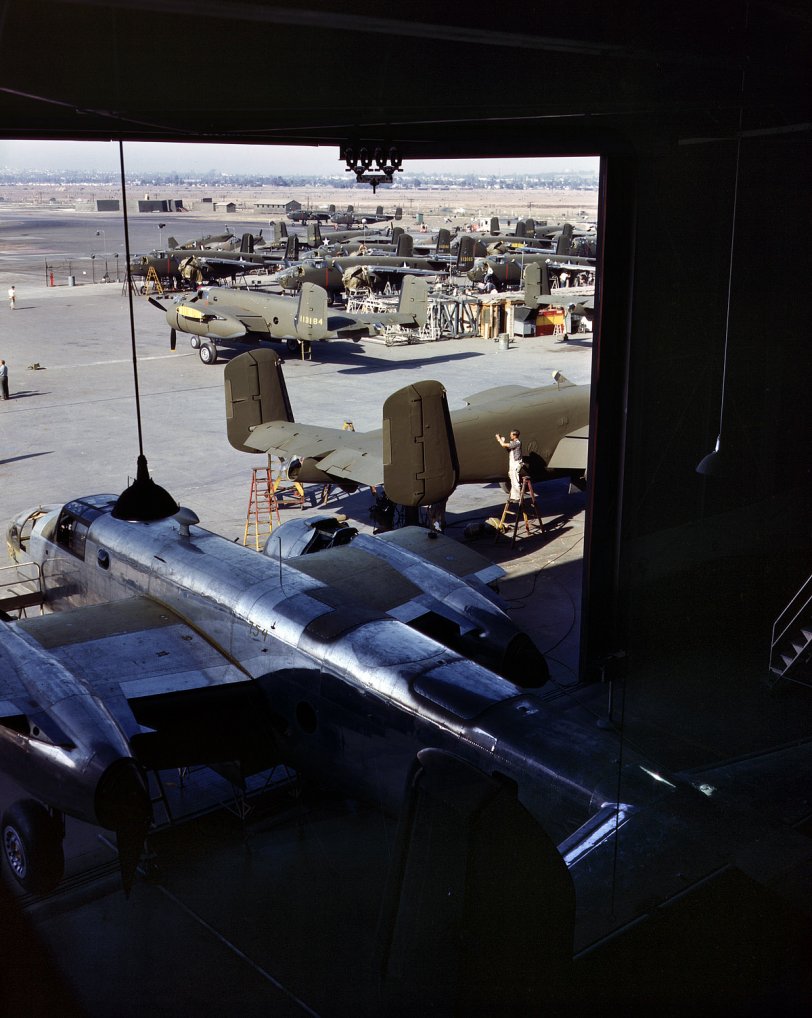 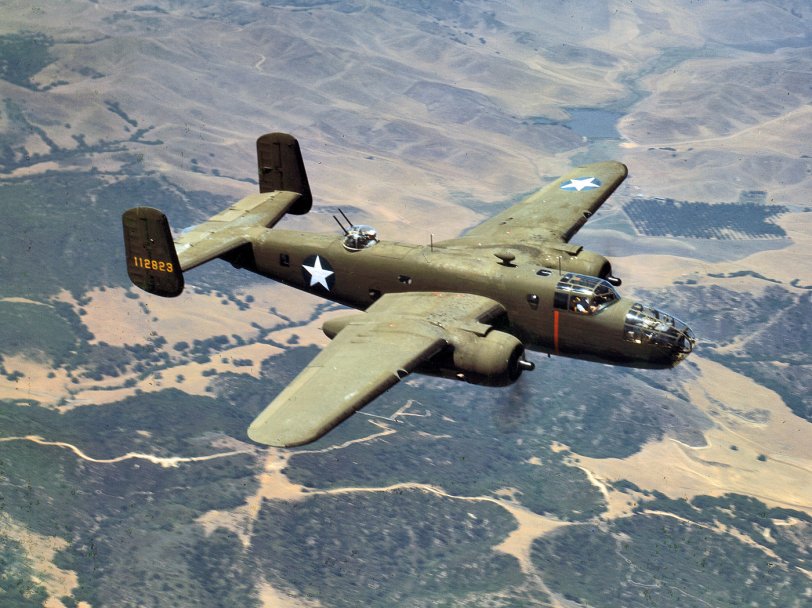 October 1942. North American Aviation B-25 medium bomber 41-12823 over the mountains near Inglewood, California. Mark Sherwood for the Office of War Information. 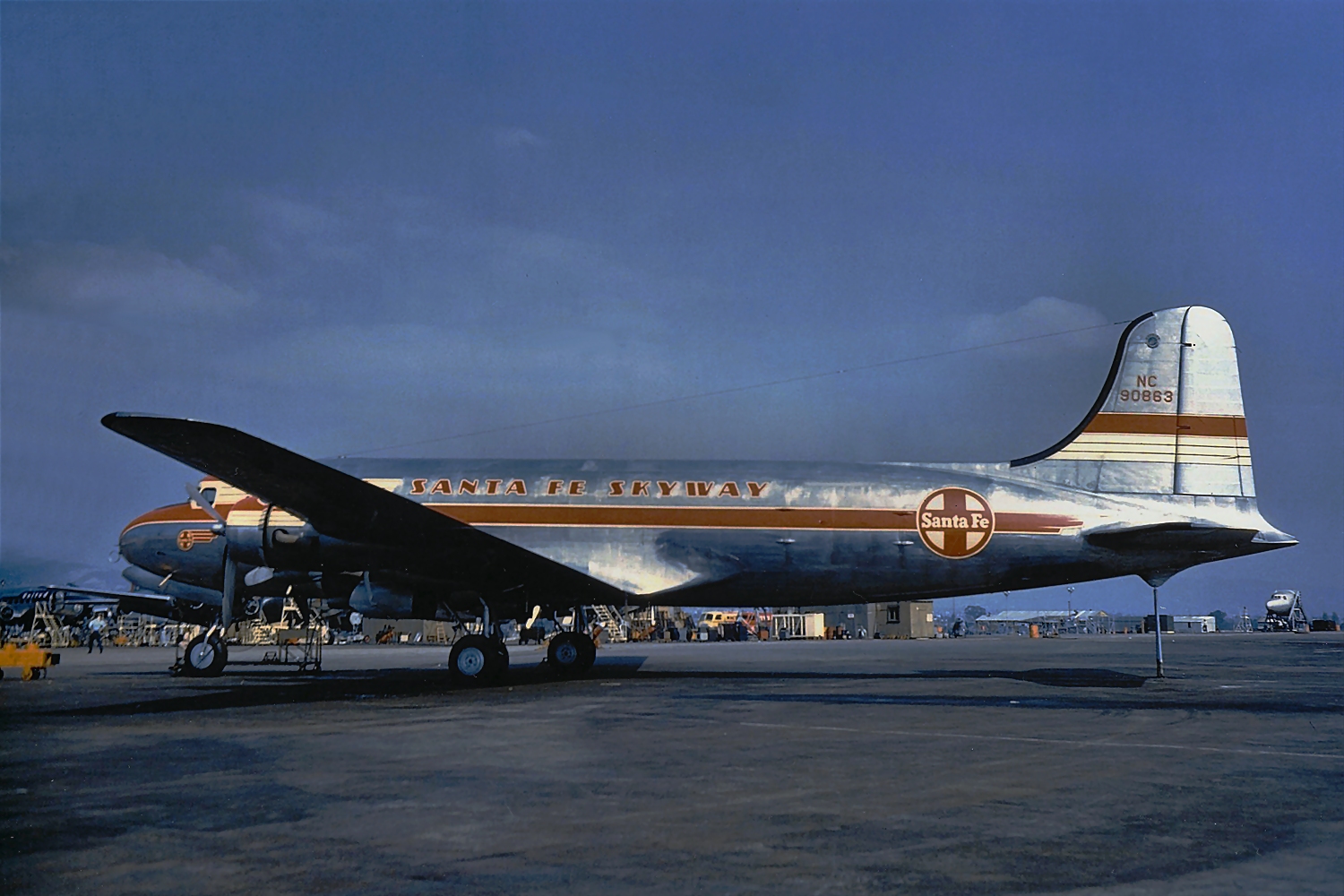 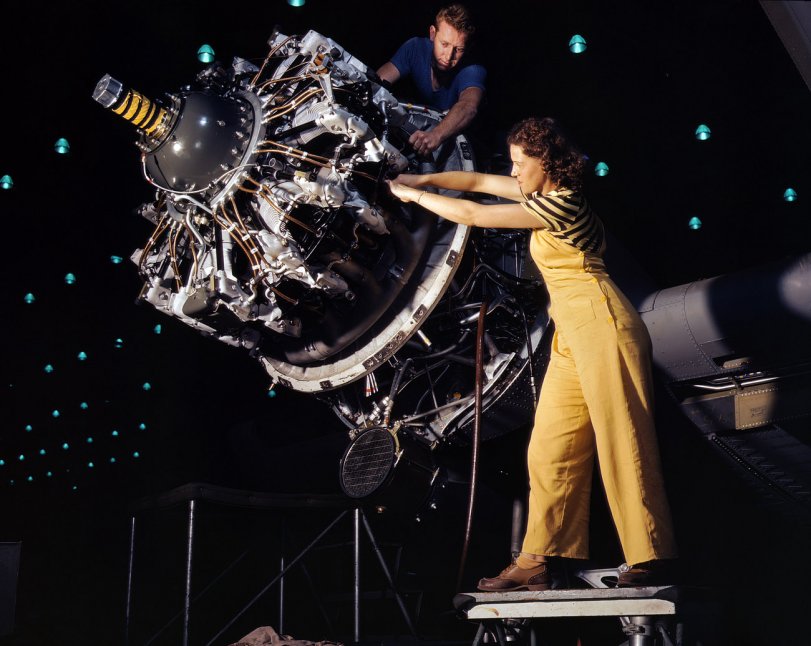 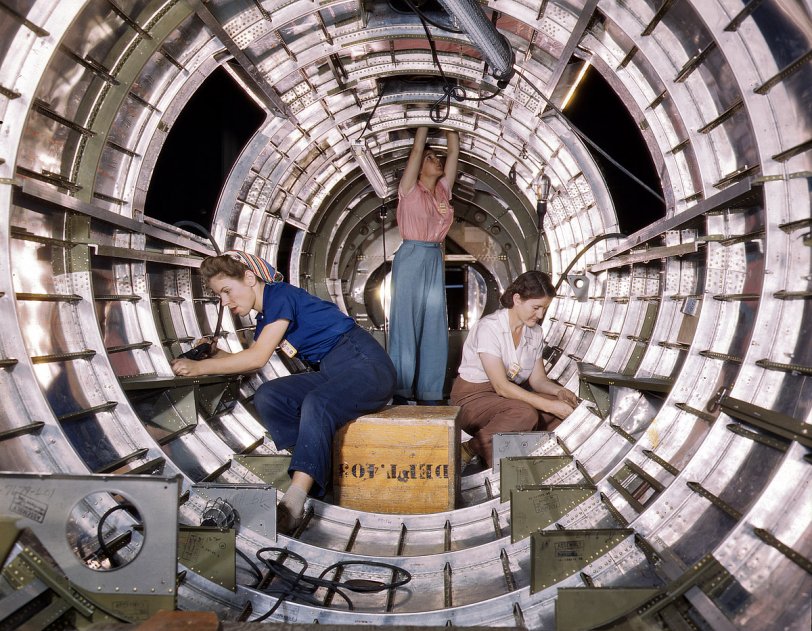 October 1942. Workers installing fixtures and assemblies in the tail section of a Boeing B-17 bomber at the Douglas Aircraft Company plant in Long Beach, California. Alfred Palmer. 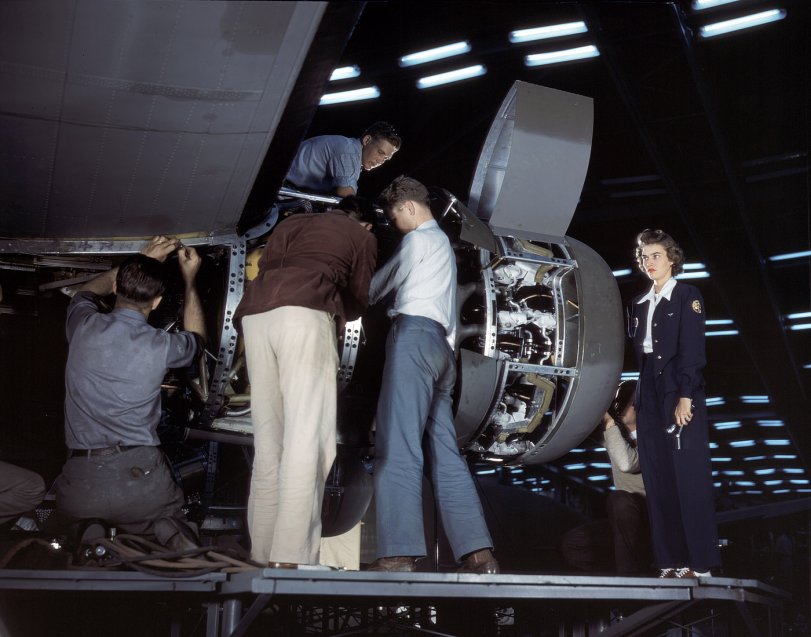 October 1942. Installing an engine at the Consolidated Aircraft Corporation plant. Fort Worth, Texas. Howard R. Hollem for the Odffice of War Information. 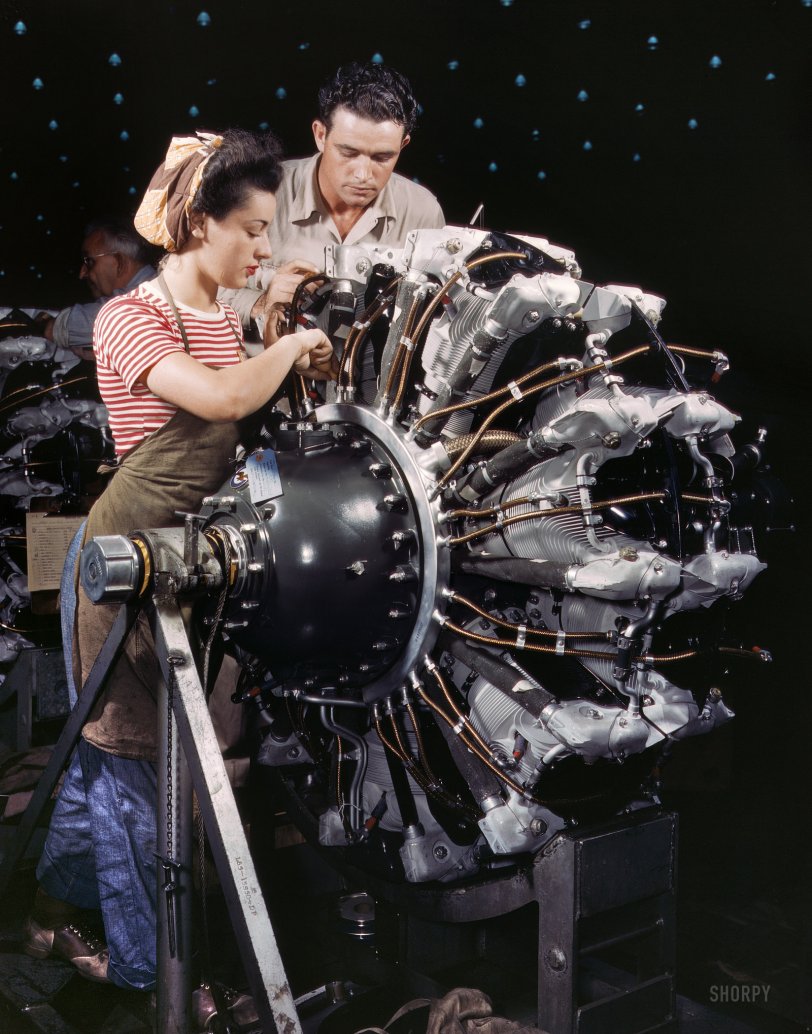 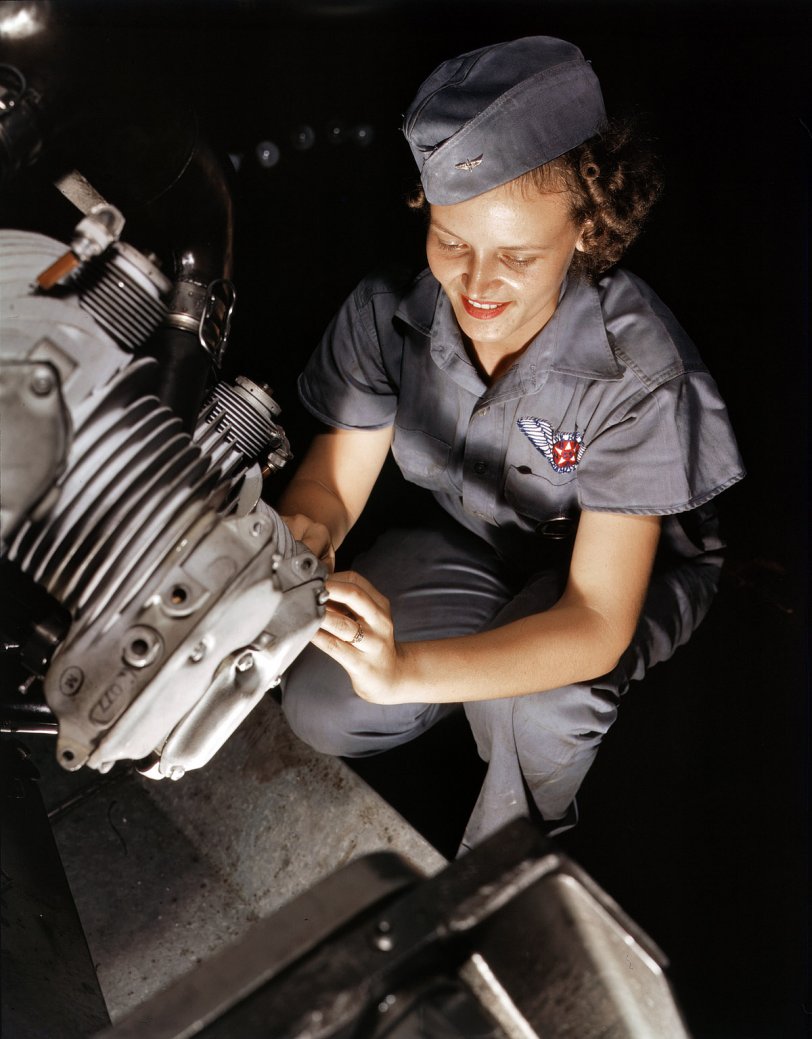 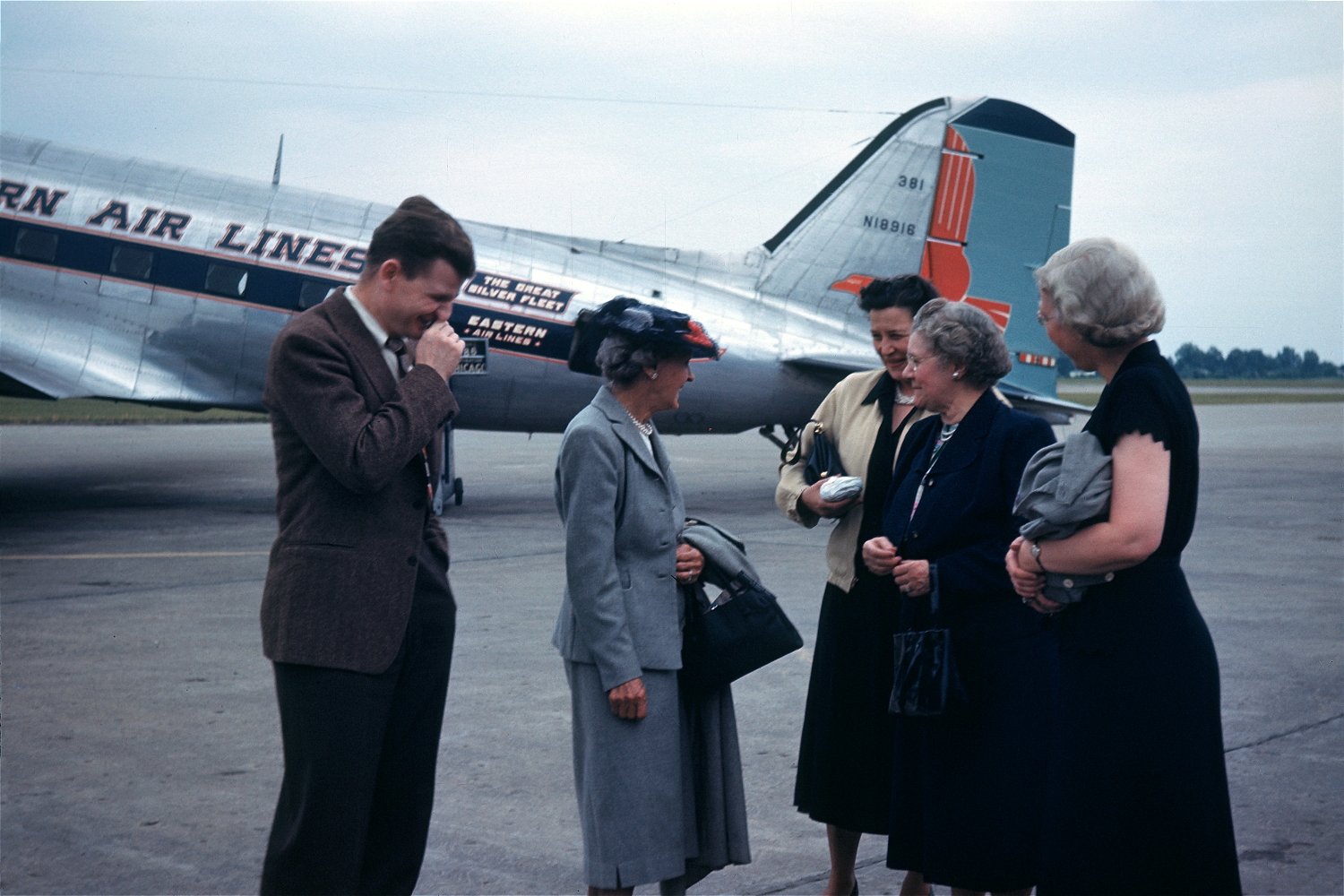 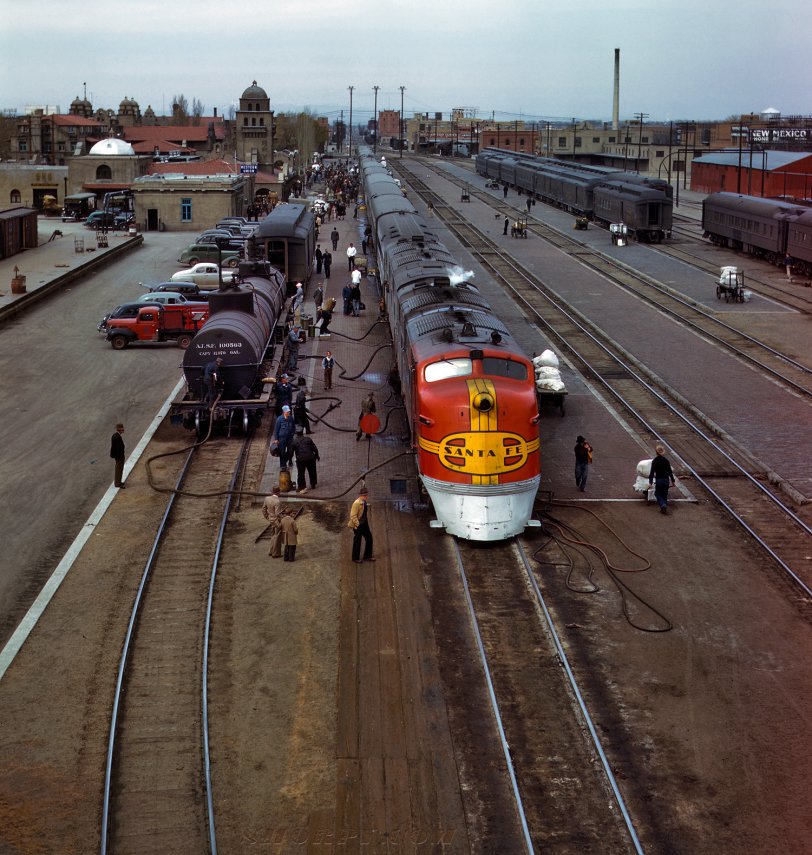 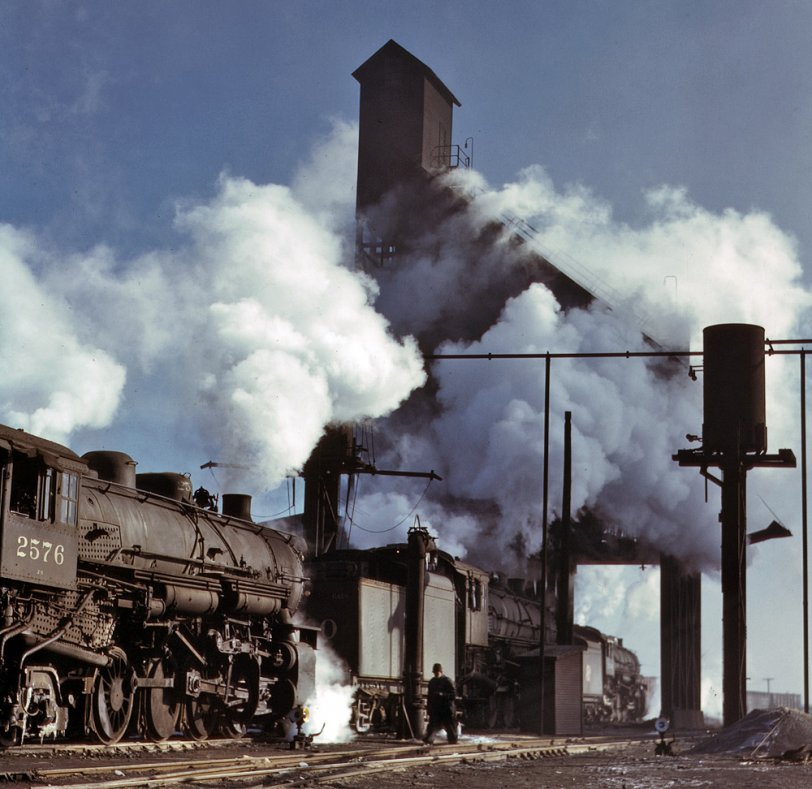 December 1942. Locomotives over the ash pit at the roundhouse and coaling station of the Chicago & North Western Railroad yards. Jack Delano, Office of War Information. 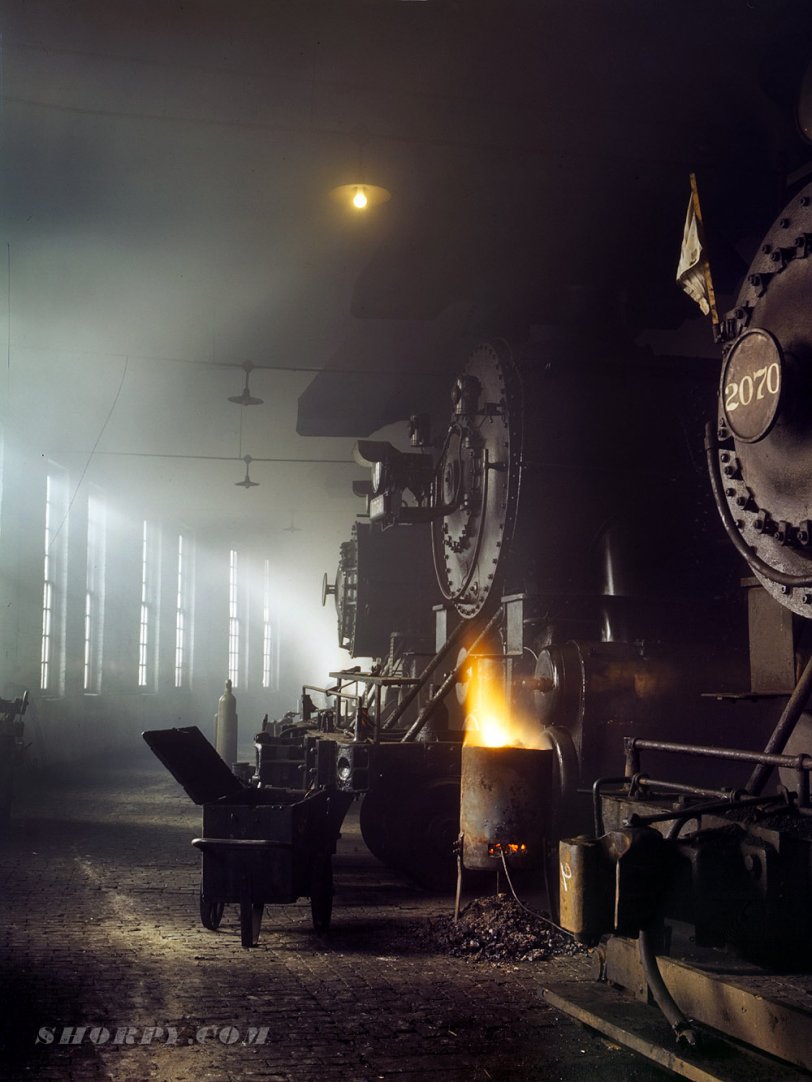 Roundhouse at the Chicago and Northwestern Railroad yard, Chicago. December 1942 by Jack Delano. 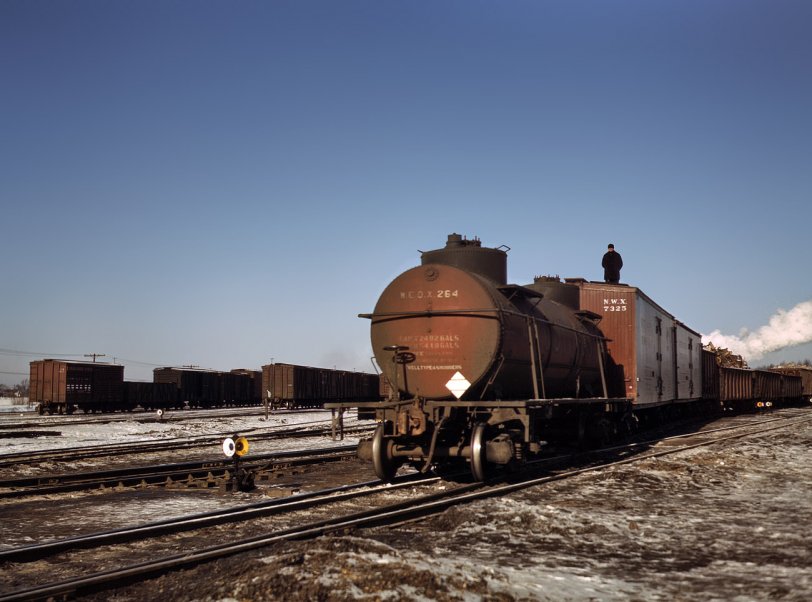 December 1942. Proviso Yard, Chicago & North Western R.R. A train, or 'cut,' being pushed out of a receiving yard toward the hump. A brakeman rides each train to signal the engineer in the locomotive at the rear. Jack Delano. 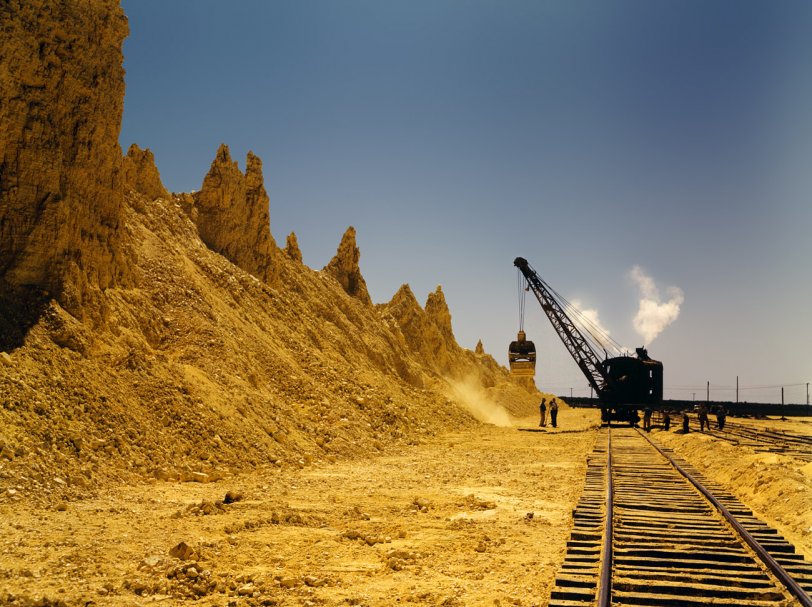 May 1943. Nearly exhausted sulfur vat from which railroad cars are loaded. Freeport Sulphur Company at Hoskins Mound, by John Vachon. 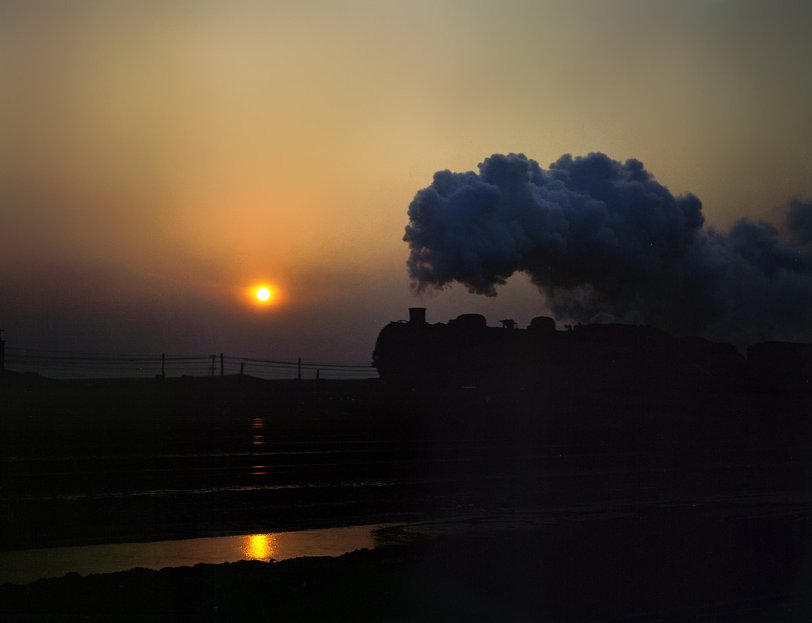 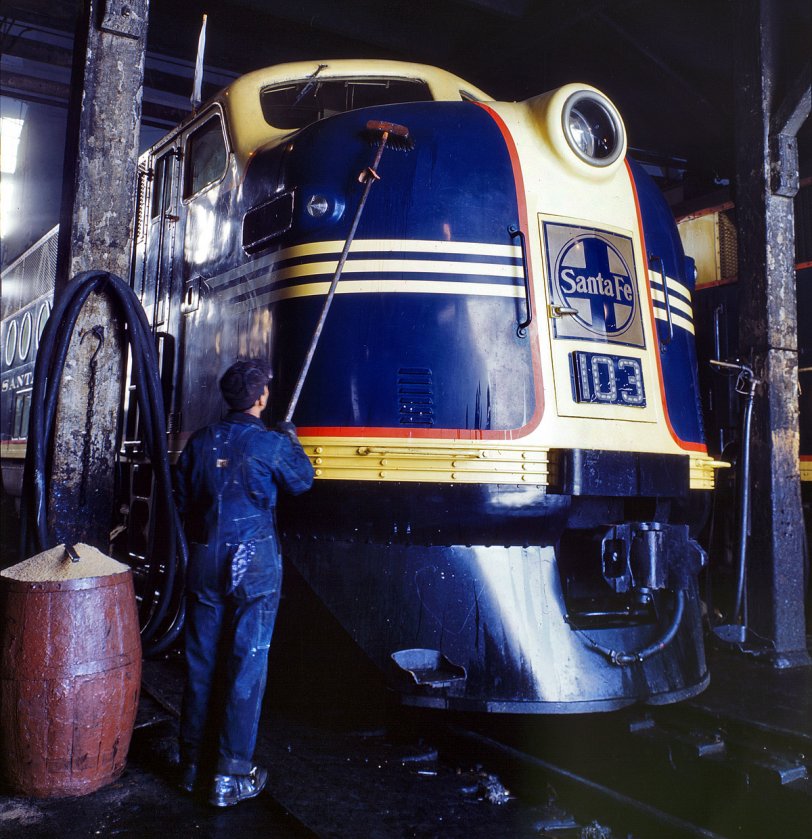 March 1943. Washing one of the Santa Fe R.R. 5,400-horsepower diesel freight locomotives in the roundhouse at Argentine, Jack Delano. 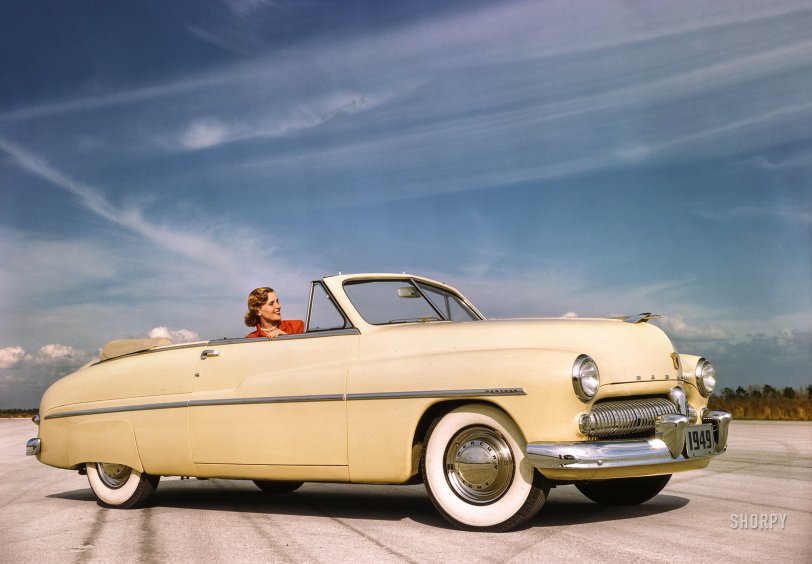 1949 Mercury Eight convertible coupe." A golden Forty-Niner if there ever was one. Color transparency from the Ford Motor Co. photographic archives.