The iconic film for collectors

'They give us those nice bright colors
They give us the greens of summers
Makes you think all the world’s a sunny day,
Oh yeah'
- Paul Simon

We don’t know of any other film brand that also became the title of a hit song like Paul Simon’s 'Kodachrome', released in 1973. But that is not all that makes Kodachrome unique among 35mm color films, as many of you who have collections of Kodachrome slides know. Besides reproducing the color of reality with a unique color palette, Kodachrome has also proven to be much more enduring than other color films. Any collection of Kodachrome slides stored in reasonably good conditions will have its original color and density very much intact, like some of our slides that go back 60 years.

Zoggavia collection wouldn't be in existence without Kodachrome. The oldest slide dates back to 1939, and it was not later than June 2009 when the production of Kodachrome ended. 90% of the slides in the collection are Kodachrome.

The additive methods of color photography, such as Autochrome and Dufaycolor, were the first practical color processes; however, these had disadvantages. The réseau filter was made from discrete color elements visible upon enlargement. The finished transparencies absorbed between 70% and 80% of light upon projection, requiring very bright projection lamps, especially for large projections. These disadvantages concerning light absorption improved when using the subtractive method.

Kodachrome was invented in the early 1930s by two professional musicians, Leopold Godowsky, Jr. and Leopold Mannes, hence the comment that God and Man-made Kodachrome. It was first sold in 1935 as a 16mm movie film, and in 1936 it was made available in 8mm movie film and slide film in both 35mm and 828 formats. Kodachrome would eventually be produced in various film formats, including 120 and 4x5, and ISO/ASA values ranging from 8 to 200.

This section introduces you to the many aviators using a different types of oil. We have collected information from some artists and the slides which proudly represent them. 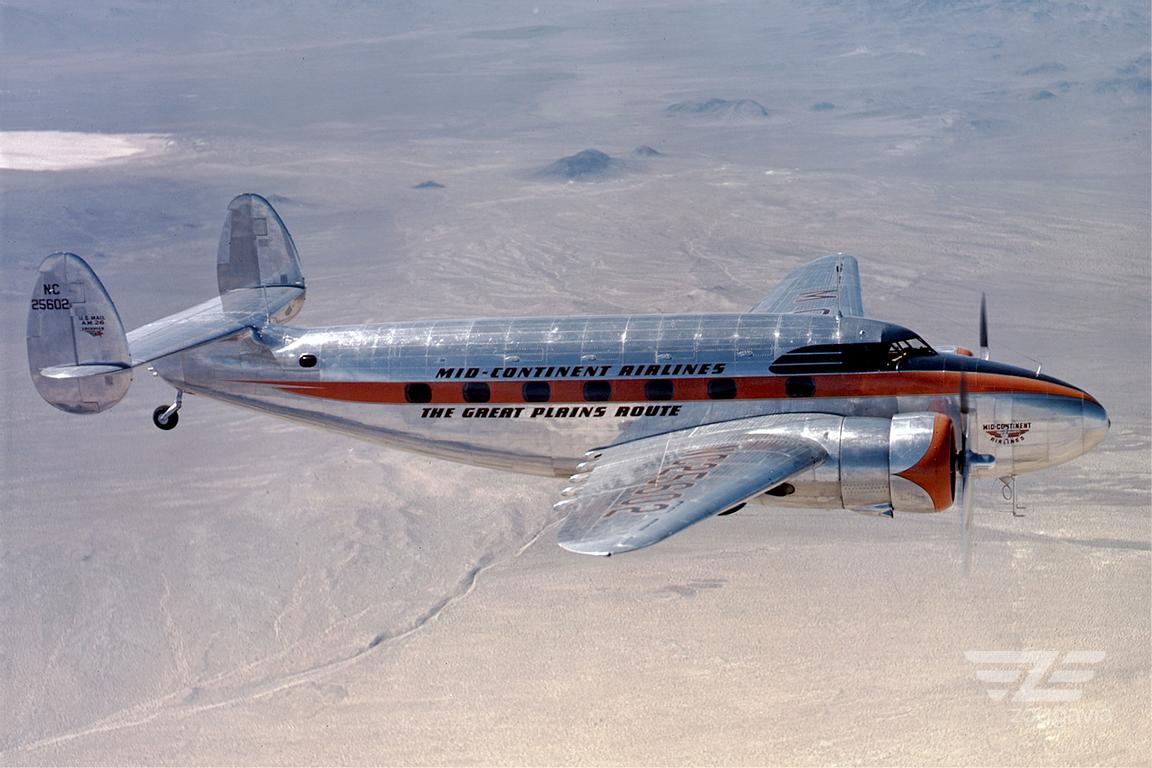 We suggest keeping aviation a little closer to home with their masterpieces even with digital photography. 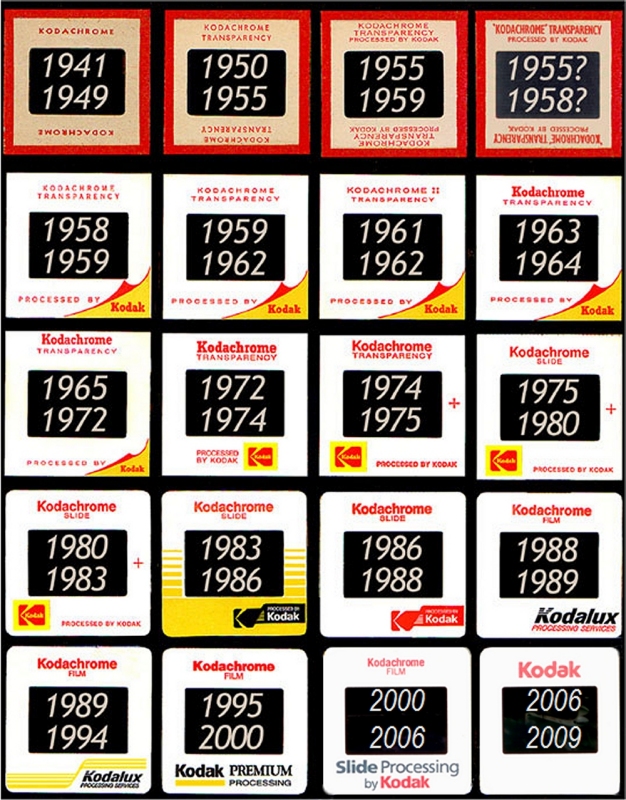 Kodachrome - Technical data
Kodak data sheet about the Kodachrome 25, 64, and 200.

Handling and preservation of color slides collections
Information on how long a Kodachrome slide should be used in a projector, or what are the storage conditions to preserve the colors from fading.

Discover over 80 years of history of both aviation photography and Kodachrome.

At first, the processed film was not mounted by Kodak. Photographers were expected to mount their films, Kodak introduced a projector for them in February 1937, and Kodak glass slide mounts were introduced in April 1937. Pressboard mounts were announced in February 1939 as being standard on all processing effective April 1, 1939.

The Pan American Boeing B314 Clipper NC18602, seen in San Francisco, is an excellent and rare Kodachrome example in a cardboard mount dated as early as 1939, Zoggavia Collection.

Early Kodachrome, made in the first few years of production, used the date code symbols of the Kodak movie film.

This image shows a well-preserved cardboard mount of high quality.

"Consent Decree Kodachrome" after June 1954. Kodak did all processing on Kodachrome until courts decreed it a monopoly. Initially, Kodak sold the film and processed it together, and the customer paid for both when they bought the film. After the decision, Kodachrome was sold as film, and independent laboratories or Kodak could do the processing. After this date, Kodachromes processed by Kodak say so on the mount.

Kodak changed the imprint because other labs began offering Kodachrome processing, which Eastman Kodak had only done.

Technicolor labs; is a collection of film laboratories across the world owned and run by Technicolor for post-production services, including developing, printing, and transferring films in all major developing processes, as well as Technicolor's proprietary ones. (1922 - present)

Eastman Kodak introduced brand colors, a yellow and red corner, and the cardboard used to be in natural white.

Introduction of Kodachrome II film in 1961, known as maybe the best slide film of all times

Example of an unknown processor of Kodachrome slide film. Most probably developed in Hawaii.

Kodak produced the Kodachrome II film in the United Kingdom and France to meet European demand for the film.

Example of a French Kodak mount. On some mounts, a red + was stamped, meaning that the new development process K-14 was used as Kodak switched from KII (which used the K-12 process) to Kodachrome 25 and 64.

Standard Kodachrome II 25 ASA film. Kodachrome was at its peak quality-wise; a fine grain, great colors, and contrast, even when underexposed, the slide showed superior results.

Kodak slightly revised the design of the classic white cardboard mount just before the edges became rounded for better handling in projectors.

One of the last take-off pictures of this classic swing tail DC-6A/C of Kar-Air Finland on its twice-weekly freight run to London Heathrow and Amsterdam, Helsinki August 1981, Zoggavia Collection.

Sometime after 1980/1981, mounts began to appear with round corners, making it easier to insert the slide into projector trays. The red "+" also disappeared as all films were developed with the K-14 process.

A new Kodak logo was introduced again in this mount design launched in 1983, developed and framed in Australia.

Since 1983, the "new" corporate logo started to undergo many variations because of the business agreements in various parts of the world, and designs surfaced that more or less integrated the symbol within other symbolic shapes. Kodak slightly changed the position of the Kodak logo on this frame.

B-2625 Boeing B737 in the colors of Far Eastern Air Transport photographed in 1985, Zoggavia Collection.

Again an Australian Kodachrome mount, this time in black and red colors.

In 1989 there were up to 3 different mount designs in use. Here is a slide developed in France. 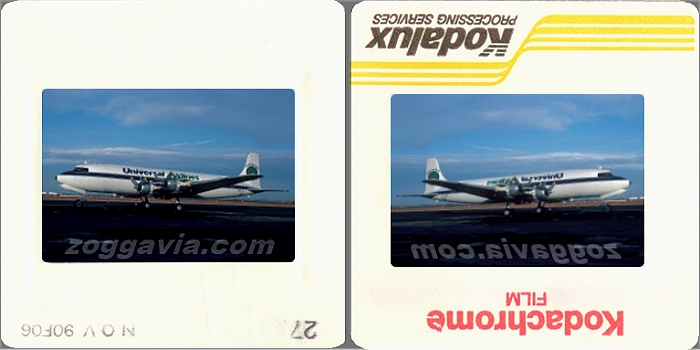 Kodak brought back the yellow color in the next series of mounts. This slide represents a North American development process.

Starting from 2000, Kodak used synthetic material for the standard mount, a PP plastic mount, with the number and date embossed by heat. Cardboard mounts were still available, marked on the right lower corner of the processing pouch "please cardboard mounts" - and it worked perfectly.

An Antonov AN-12 in the colors of Ukraine Cargo Airways, one of the many freighters, at Sharjah, UAE in April 2000 Zoggavia Collection.

In 2000, a straightforward design, just plain Kodak in red color, was implemented. Cardboard mount development was in Lausanne, Switzerland, the only laboratory in Europe for Kodachrome 64 film.

Already a classic airliner, the Boeing B757, as used by the Airline of Azerbaijan, registered as VP-BBR seen at Frankfurt, July 2006, Zoggavia Collection.

Eventually, the last Kodachrome mount design, cardboard, though sent to Lausanne, the processing took place in the USA.