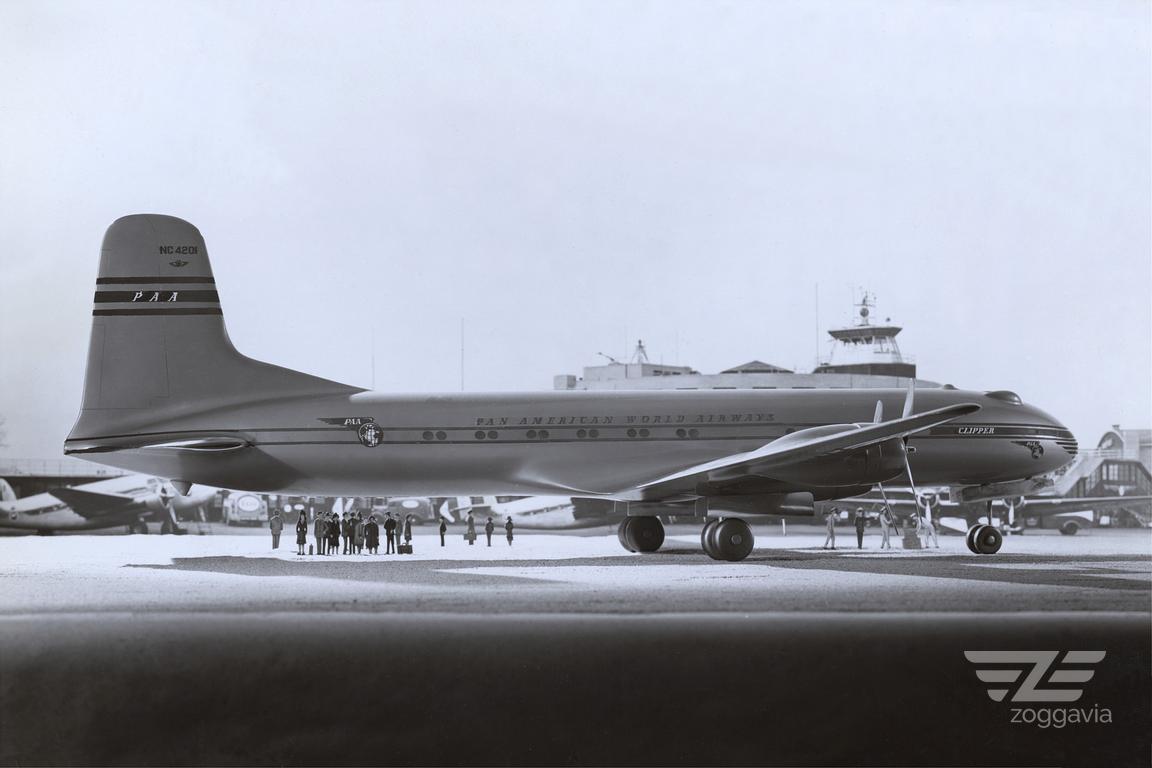 The original project of the Douglas DC-7 was a civil version of the military transport C-74 'Globemaster 1' but never reached the market introduction despite the first order of 26 aircraft from Pan American World Airlines.

Pan American canceled its order because the limited military production run increased civilian aircraft costs. Douglas then dropped the DC-7 project. The DC-7 designation was later used for a completely different civilian airliner project in the early 1950s, having no relationship to the C-74.

After much persuasion from the President of American Airlines, C.R. Smith, Douglas decided to modify the DC-6B around the new Curtiss-Wright R-3350 turbo-compound engine available for civil use in 1951. This new power plant developed 3'250 hp for take-off, and the increased power brought the speed up to 360 mph (560km/h), which also gave an improved range allowing transcontinental operations for the first time. The DC-7 differed from the DC-6B in having a 40inch (1,02m) stretch in fuselage length and four-bladed propellers. 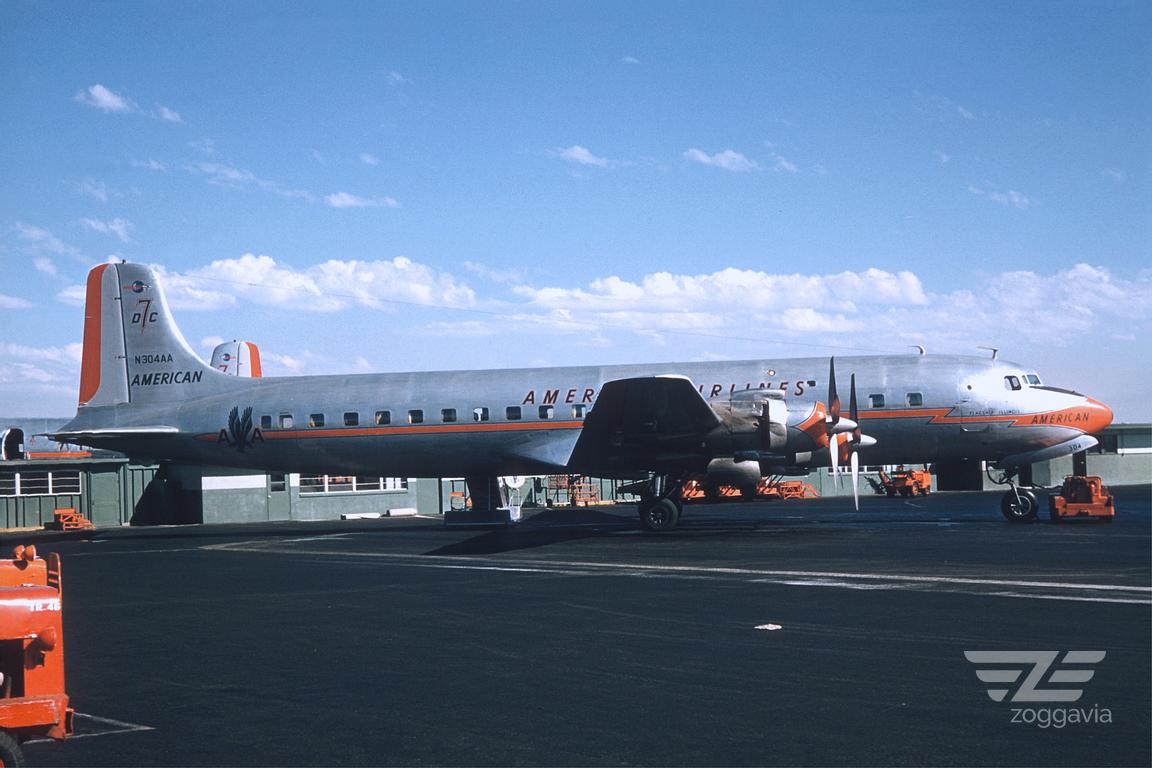 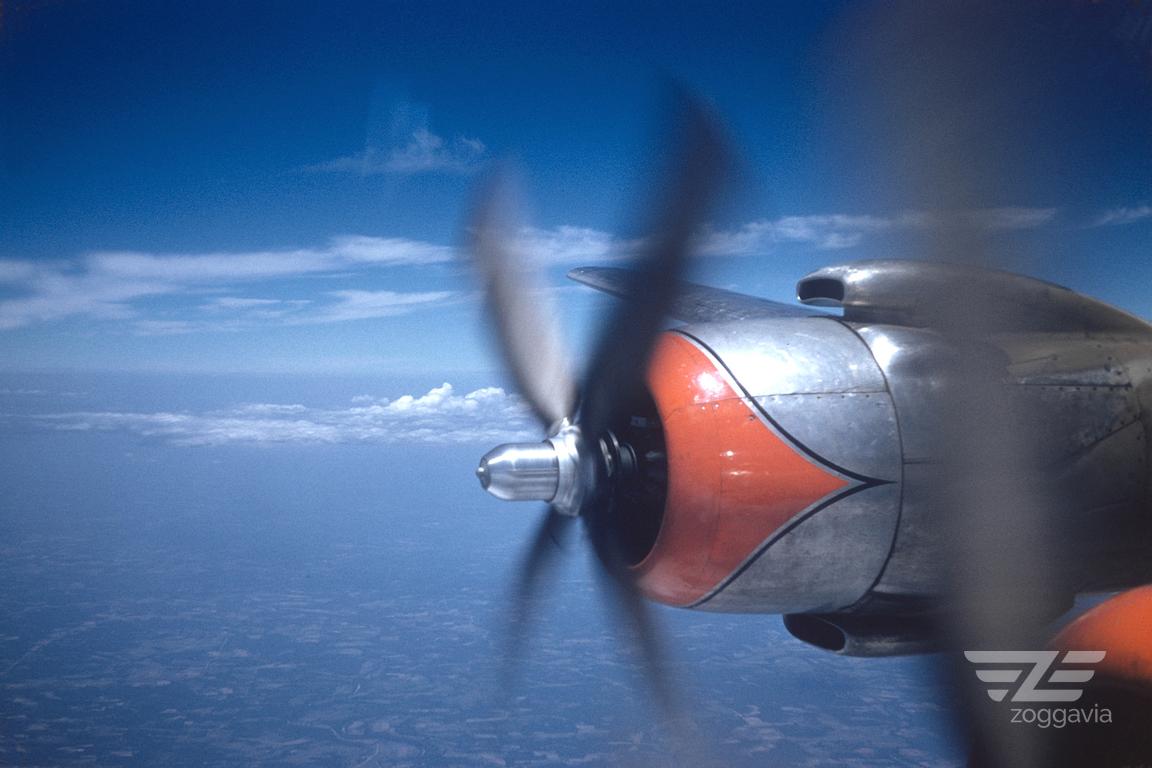 Magnificent view of the mighty Curtiss Wright R-3350 988TC-DA-2 turbo compound radials each delivering 3250 hp of an American Airlines Douglas DC-7 on route from Idlewild to San Diego on on 1955. Zoggavia collection

The first flight was on 18 May 1953, and American Airlines introduced the first of 25 ordered new airliners on the daily non-stop New York - Los Angeles service on 29 November 1953, reducing the coast-to-coast flying time to 8hrs 45min westbound and 8hrs eastbound. The DC-7 was not as economical per seat mile as the DC-6B, and the market was limited to four major U.S. airlines; American (24), National (4), Delta (10), and United (57 in total), resulting in total production of 105 aircraft.

The DC-7B was designed as an extended range version of the DC-7, which included greater fuel capacity for the nacelles from saddle tanks and increased all-up weight. Many of the aircraft delivered did not incorporate these arrangements.

As an interim measure to compete with the Super Constellations, Pan American World Airways introduced DC-7B's on its transatlantic service from New York to London on 13 June 1955. However, they were later transferred to more suitable routes owing to the inadequacy of their range on these transatlantic routes. 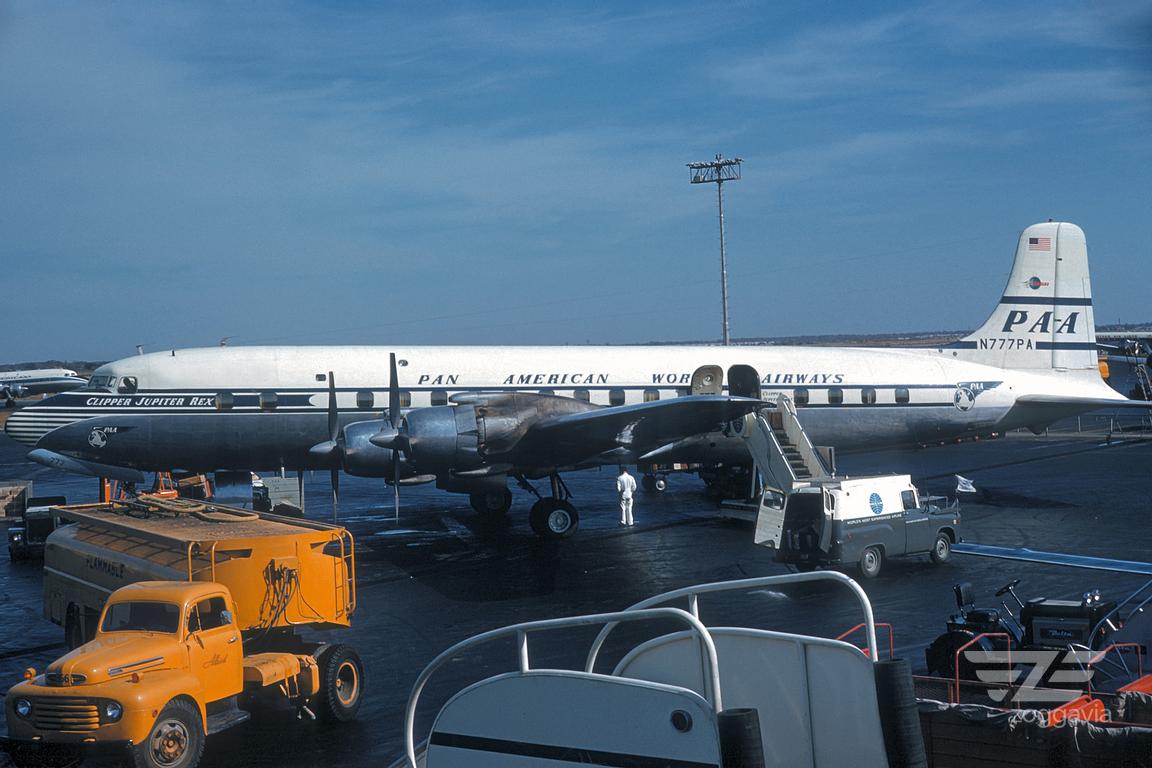 N777PA Douglas DC-7 B 'Clipper Jupiter Rex' of Pan American World Airways at New York Idlewild in October 1958. From 1965 to 1969, this DC-7B flew as HR-TNH with TAN Airlines. Zoggavia collection 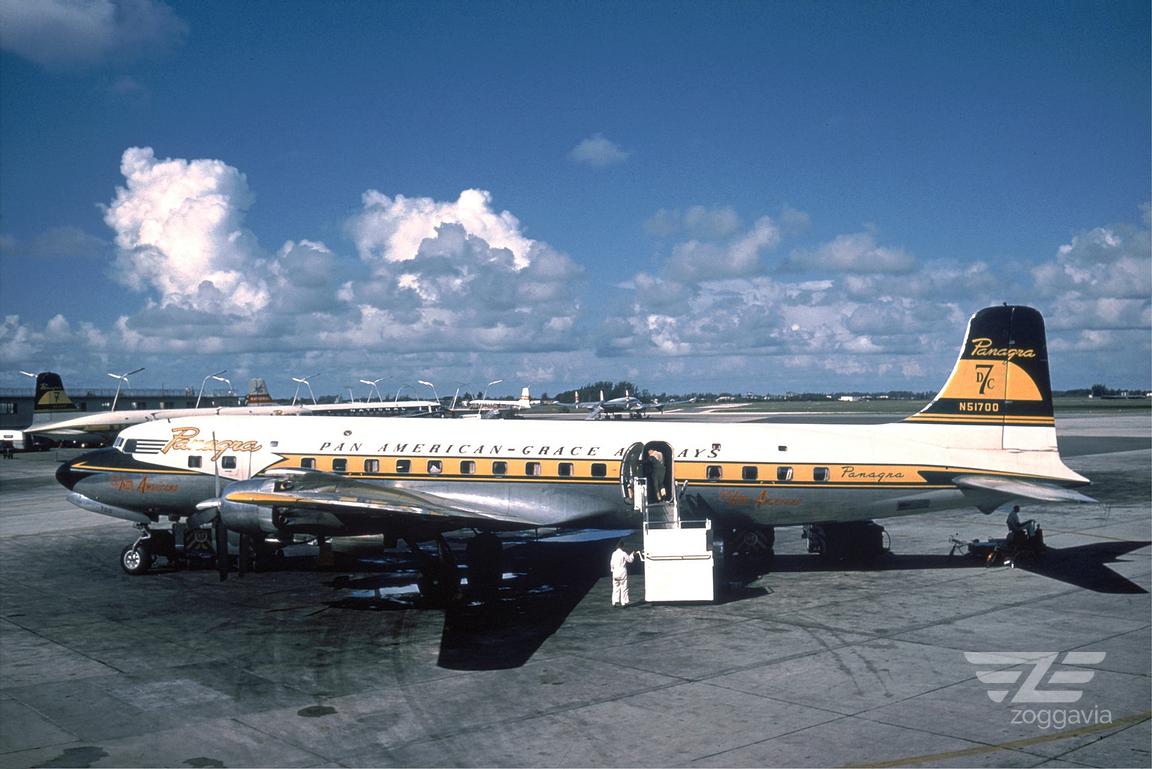 During the DC-7B development, Douglas realized the potential of the new 3 '400 hp version of the Wright R-3350 engine in manufacturing an even more extended version of the DC-7. Capable of flying the essential transatlantic routes non-stop in both directions and in all but the most adverse weather conditions.

This ability was later used under the synonym 'Seven Seas,' meaning the DC-7C could cross all seas non-stop. 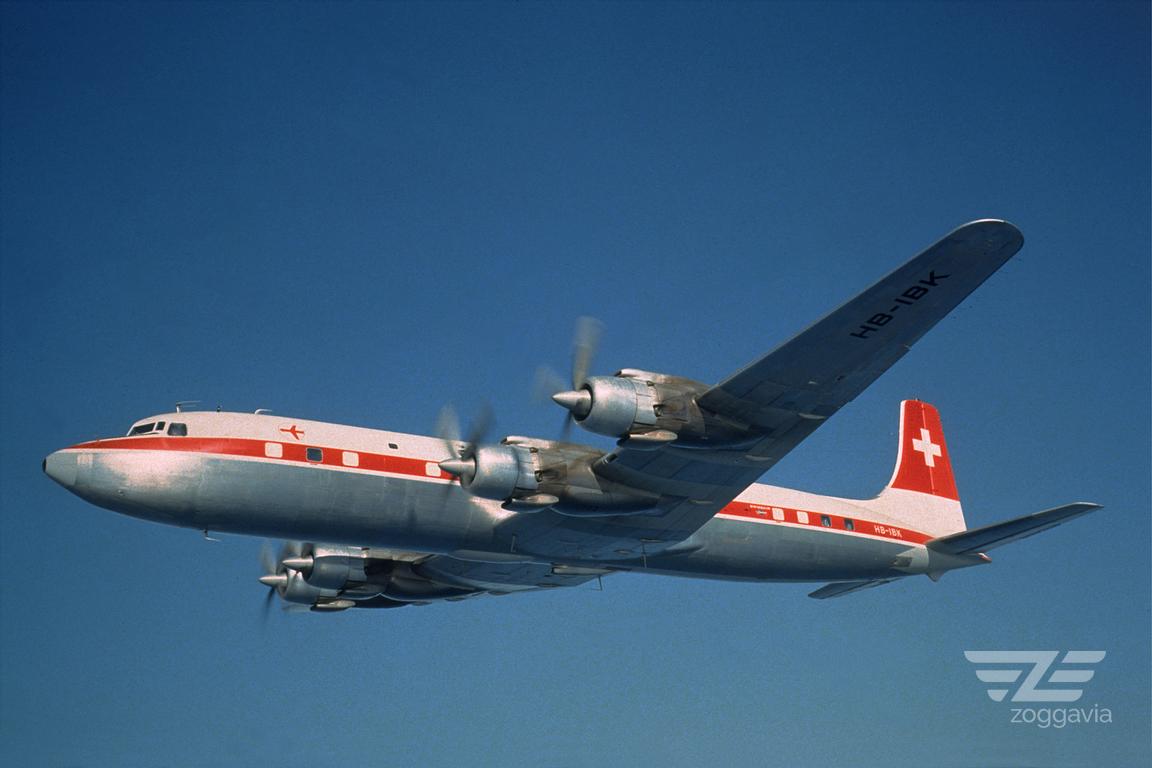 Douglas DC-7C HB-IBK of Swissair seen air to air in November 1956. This DC-7 was later the only type used in military service as F-ZBCA operated by the l'Armee de l'Air, French Air Force, in 1963. Zoggavia collection 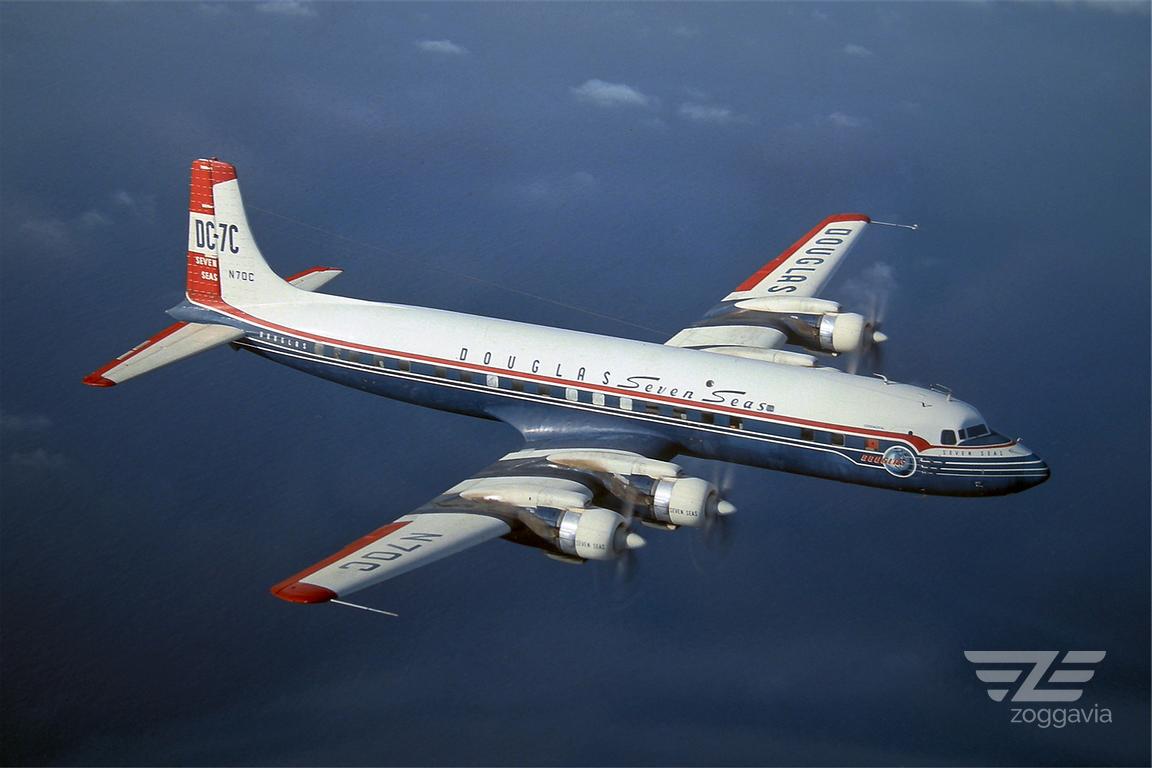 N70C, the Douglas DC-7C prototype, during a test flight along the Californian coast. This version, called Seven Seas, could cross every sea due to its increased range. Panair do Brasil later took the delivery of this DC-7C as PP-PDO. Zoggavia collection

The fuel capacity was increased by an additional 5-foot (1,5 ) wing section inserted between the inboard engine and the wing root, thus giving the DC-7C an extra 10-foot (3m) wing span and providing an additional capacity of 1'000 gallons (4'450 l), resulting in a range of 5'600 miles (9'000 km). A further 42-inch (1,06 m) fuselage ahead of the wings and a taller fin and rudder to cope with the greater power and weight. Until the introduction of the Boeing 707 and DC-8 jetliners in 1959, the DC-7C accounted for a significant proportion of passenger traffic across the North Atlantic. Plans for a turboprop version, designated DC-7D, with Rolls Royce Tyne engines never materialized. All DC-7 built; 338 of all series.

Douglas built no all-freighter aircraft for the sole purpose of use for cargo operations. All conversions made by Douglas covered standard series DC-7 airliner, with the installation of two large freight doors and a more robust cabin floor, plus other modifications based on the individual airline's specifications. 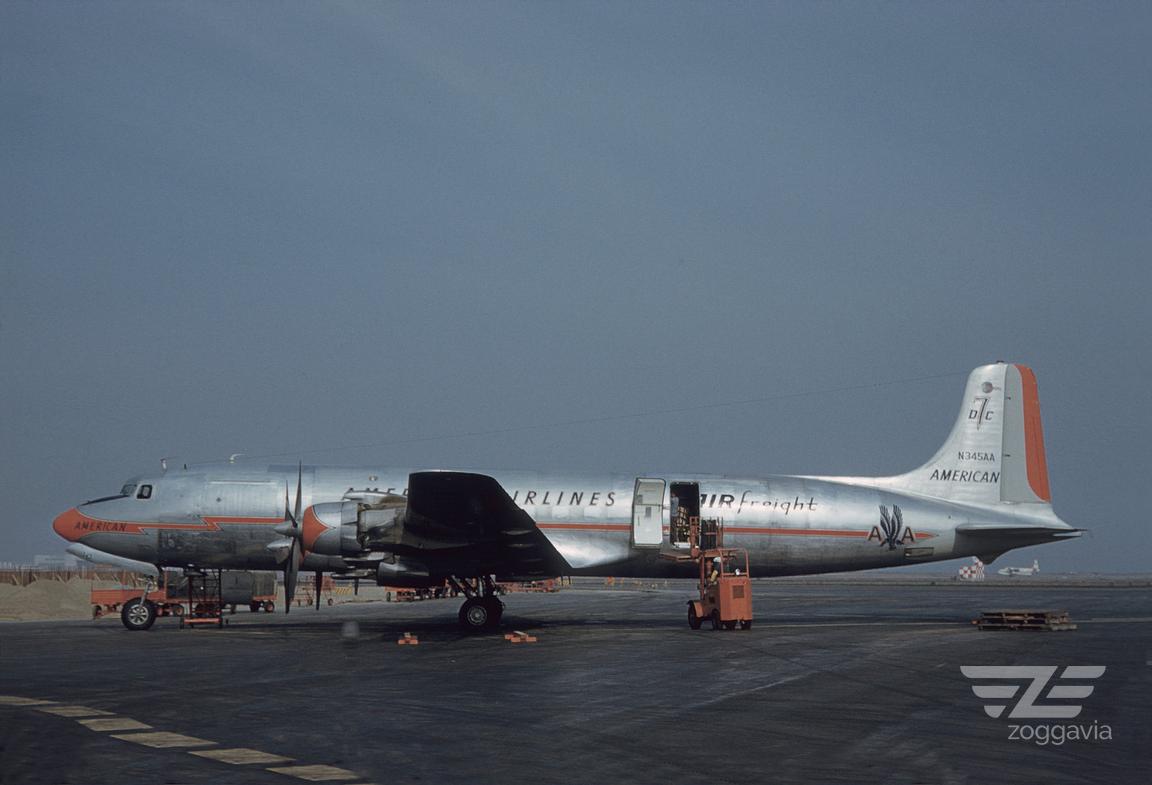 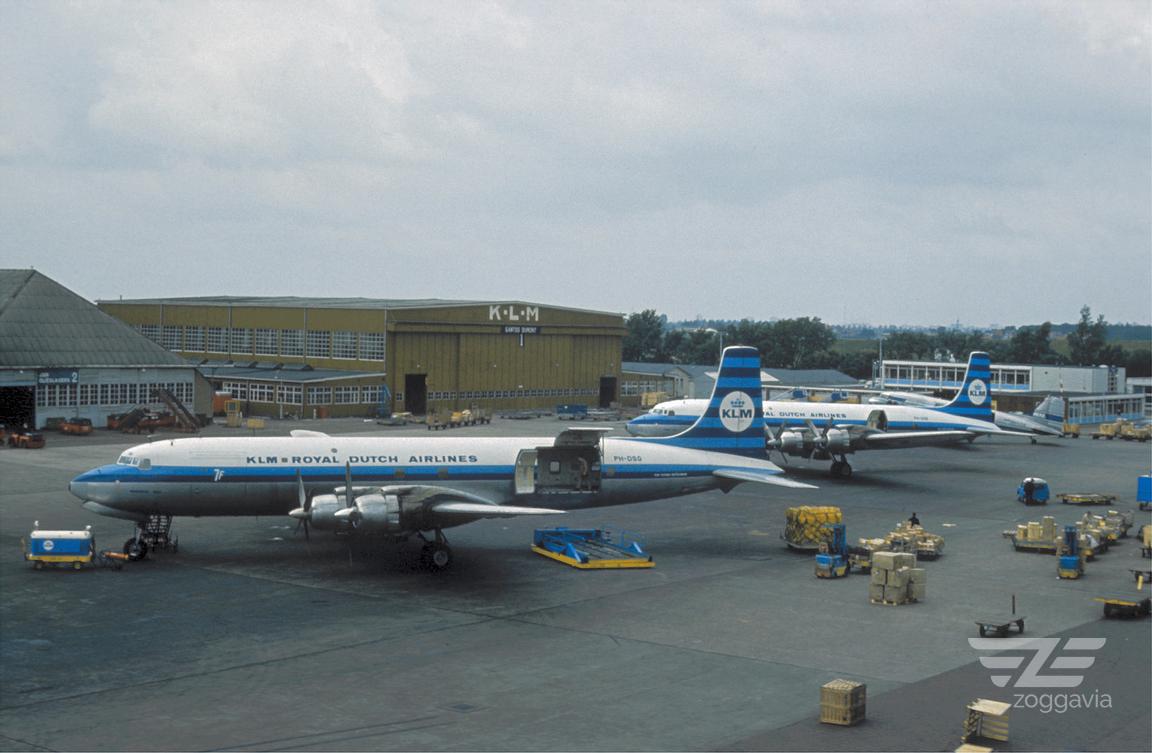 PH-DSG DC-7C/F KLM pictured together with a sister ship in the cargo area of the airport of Amsterdam in 1965,
Zoggavia collection 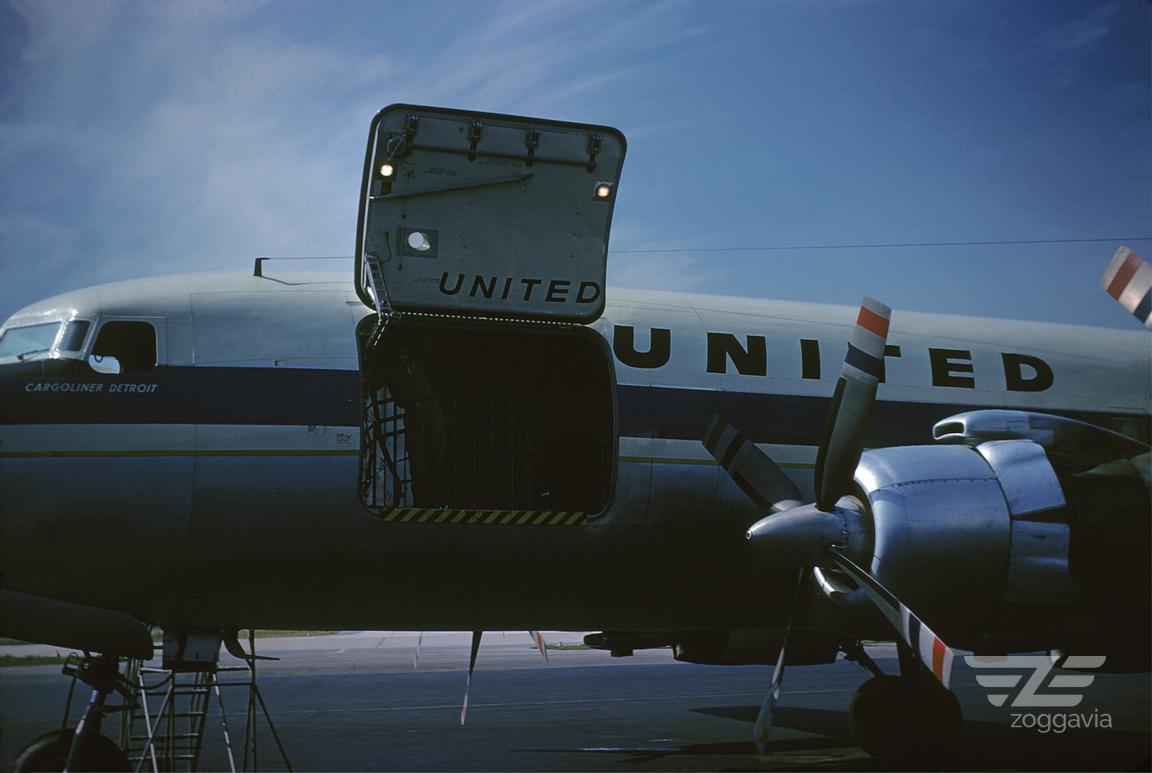 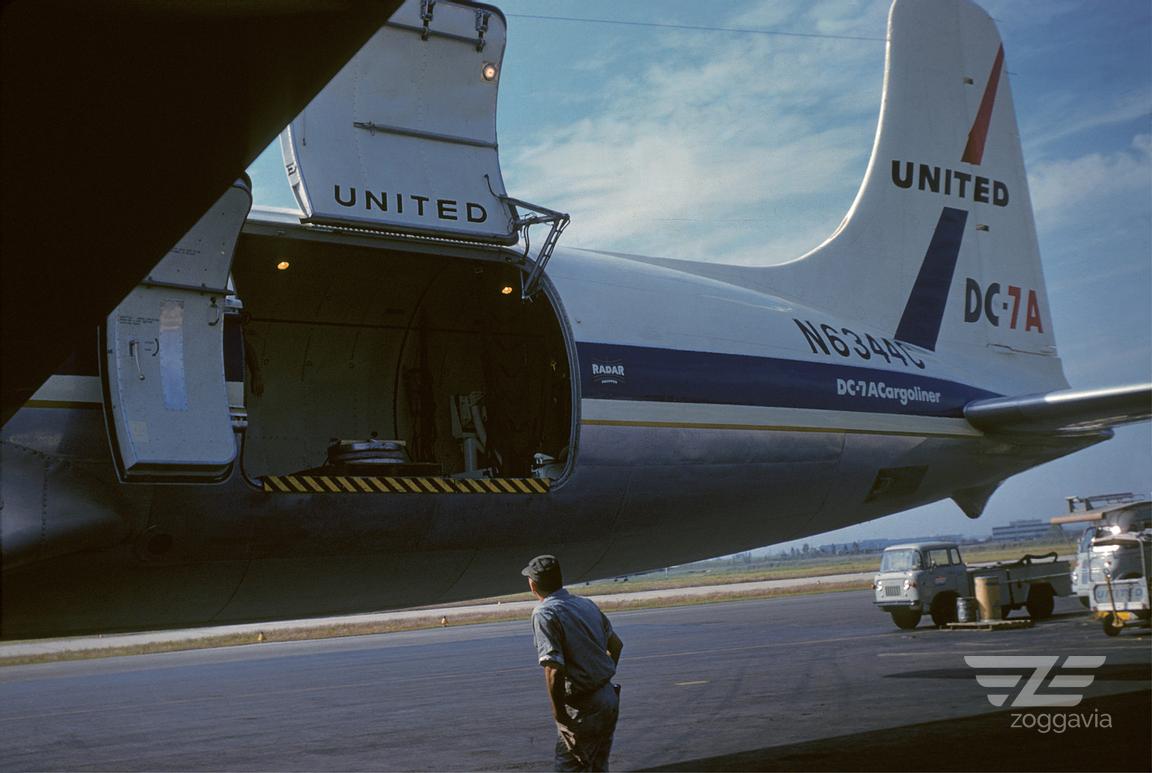 Other companies and airlines carried out other DC-7 series conversions, which merely had the letter 'F' added to the original designation. The DC-7 freighters replaced the Douglas C-54 / DC-4 and Douglas DC-6 freighters until DC-8F and Boeing B707C entered the significant long-haul routes. 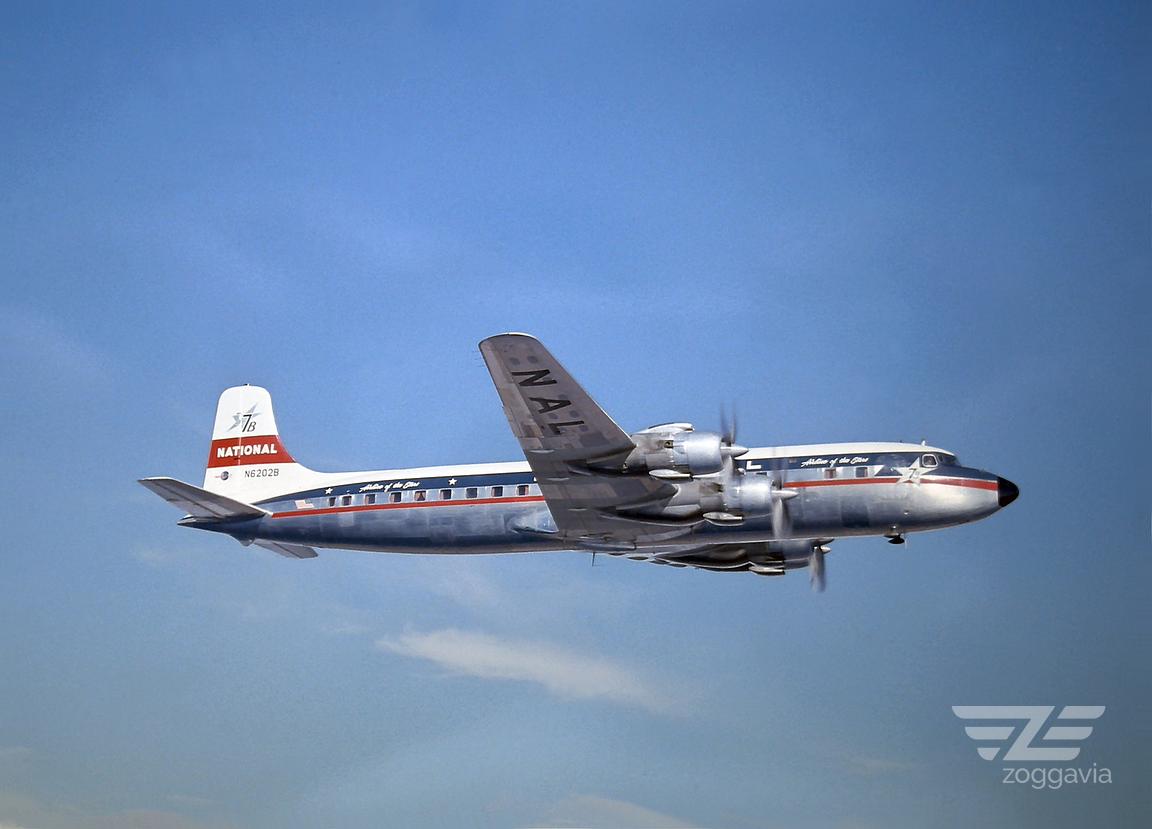